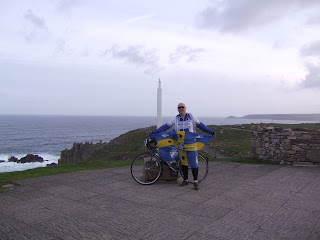 If the Beatles had visited Lands End to start a LEJoG, then this song would have been called “The long, STEEP & hilly road.”
An early(ish) start from Penzance by car (thanks John) to Lands End. The obligatory pictures taken. The arms for the sign belong to the official photographer & are taken home each night. Hence the rather pathetic looking post in the picture.
The official register duly signed, my log book stamped and I was under way at 0726. A very brisk (by my standards) ride back to Penzance (10miles) saw me having tea and a panini for breakfast with John at The Green Bean coffee shop (definitely recommended if you are ever in Penzance.

Leaving Penzance about 0915 the plan was I would ride to Camborne via the back roads, then head for Redruth, and towards Truro. John was going to give me till 12noon then drive after me to meet me for lunch between Truro & St Austell circa 1pm. However by 1230 I was through St Austell, so stopped at a pub waiting for John (his wife Jane & their daughter). I had done 55miles before lunch – already my longest ride since last summer- at an average speed of 16mph.

After a lengthy lunch (no alcohol though) I collected my bags from John (after jettisoning the handlebar bag & some bits of kit). I was now having to ride carrying all the kit I needed. Still it was only 18miles to Liskeard. Surely that would be easy…

Erm think again! It was the hardest 18miles I have ever ridden. I was not only having to use the Granny ring (smallest ring @ front) but also the granny sprocket at the back (largest sprocket). I have never used this Granny gear before – ever! I crawled into Liskeard.

I got a room at the Hotel Nebula, its a twin room, so my bike & I will be cosy in there! Breakfast is to be at 0800 tomorrow but landlady gave me the tour of the kitchen so I can help myself if I want an earlier start. The cost of this luxury? Only 35 of your Cornish pounds.

2 thoughts on “>The Long & Winding Road”