>this about sums up how I feel. The effects of jet lag and yesterday’s nearly 400 mile drive are catching up with me. Not to mention, last night in the bar, then free beers today at the Association of Iron & Steel Technology Exhibition where I was official an exhibitor! That says exhibitor not exhibitionist!

Today brought an early start and after breakfast I was at the AIST exhibition as Phil set up the stall he had there. I was accredited as an exhibitionist to allow me in to the show! I spent most of the rest of the morning wandering round Pittsburgh along the rivers. Yes plural. Pittsburgh is at the convergence of 3 rivers.

Phil’s wife Tiffany came down from Cleveland today and took me for lunch in the Grand Station Restaurant which was in the old station building. It was worth it just to see the magnificently restored building. A real architectural gem. Bonuses were the good company and the great food. Good call Tiff.

After lunch and a bit of a look at more of Pittsburgh we joined Phil at the AIST exhibition and sampled the free ales on offer. It would have been rude not to have tried them wouldn’t it?

Then this evening all 3 of us went to a glorious restaurant at Mt Washington which overlooks Pittsburgh. The views were magnificent. Pittsburgh is a truly lovely place to see. The food and company were equally good.

So, now I am all pigged out and tired, its time to say “Lets Go To Bed” 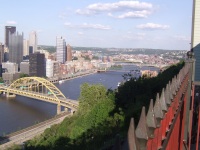 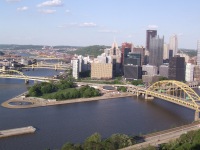 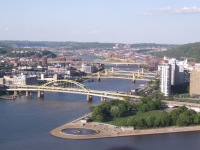