Or should that be

I won’t be home for tea

What am I ranting on about you are asking yourselves? The FA Cup 3rd round is not until next month. The FA Cup 2nd round replays were last week, so it’s surely not anything to do with Leyton Orient Or Newcastle United.

Well, last night Spennymoor Town FC (http://www.spennymoortownfc.co.uk/ ) won away in the FA Vase 3rd round against Scarborough Athletic FC (http://www.scarboroughathletic.com ) at  the 3rd attempt of staging the tie. The tie was played at Scarborough’s current home in Bridlington. The old Scarborough FC were wound up on 20th June 2007. After being a leading light in non league football, they were the first club to gain automatic promotion to the Football League in 1987. The high point in their career in the league came in 1989 when they beat Chelsea in the League Cup at home 3-1 after drawing away 1-1.

Sadly for Scarborough, in 1999 they lost their place in the league in the last seconds of the last day of the season when the Carlisle goalkeeper scored a goal against Plymouth that kept Carlisle in the League but condemned Scarborough to their first relegation ever.

Anyway, after Scarborough were relegated they got into more financial trouble and eventually were wound up in the High Court on 20th June 2007. A new club was formed 5 days later but have not been able to play at the old ground which remains chained up. It is sad to see the ground today decaying away. 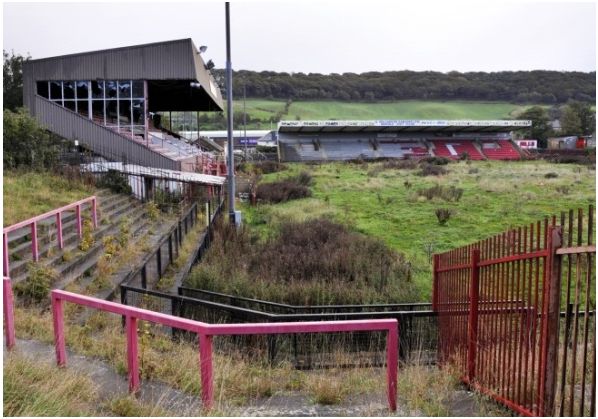 The McCain Stadium sadly decaying away

As I am typing this post, I have just been advised that Spennymoor will play away at Cadbury Heath FC from Bristol in the 4th round of the FA Vase. (There are 6 rounds, then the semi-finals and final) It’s a long haul from Spennymoor to Bristol, but hopefully a good result can be obtained. In this competition, Spennymoor have not been beyond the 4th round. Cadbury Heath FC are in level six of the non league pyramid. Spennymoor are at level five, so should be better than Cadbury Heath, at least on paper. I know, I know, football is played on grass not paper.

I am not sure yet if I am going to be able to make it down to Bristol for the game.

Well, I’m still not cycling much. I set off to cycle in yesterday, got 1 mile down  the road and got another puncture in the rear wheel. The tyre is clearly shot, so I walked back home and went in by public transport. I bought 2 new tyres last night and fitted one of them today, but the first 2 inner tubes I tried were damaged, so after I eventually got the tyre inflated with a 3rd inner tube. I decided I couldn’t face cycle in and got the tube again.

I promise that weather permitting I will cycle in tomorrow.  The forecast is for rain and cold winds tomorrow – joy eh? Never mind, I’ve got the joys of the Lee Valley Youth Cycling Club christmas party to look forward to on Saturday lunchtime. As per usual I will no doubt have the joys of marking the multiple choice christmas party quiz. To avoid the possibility of answers not in accordance with the answer sheet, we have arranged a multiple choice quiz this year.

Following on from my post yesterday regarding the stoning of women in Iran, comes the following stories

Tue Dec 14, 2010 1:17pm GMT
KHARTOUM (Reuters) – Sudanese police arrested dozens of women protesting on Tuesday against laws they say humiliate women after a video of a woman being flogged in public appeared on the Internet.Floggings carried out under Islamic law are almost a daily punishment in Sudan for crimes ranging from drinking alcohol to adultery.

But vague laws on women’s dress and behaviour are implemented inconsistently. One case sparked international furore when Lubna Hussein, a Sudanese U.N. official, invited journalists to her public flogging for wearing trousers.

The video, which was removed by YouTube, showed a crying Sudanese woman being lashed by two policemen in front of onlookers in a public place. She was made to kneel and the police laughed during the punishment.

“Humiliating your women is humiliating all your people,” the women shouted as they were being arrested on Tuesday.

Around 50 women sat down outside the justice ministry holding banners and surrounded by riot police telling them to move.

All the women were arrested and taken to a nearby police station. Their lawyers were prevented from entering, but senior opposition politicians were allowed to go inside.

The women said they had tried to get permission for the protest but had been refused. The police declined to comment.

“The authorities here take the law into their own hands. No one knows what happens inside these police stations,” said one of their lawyers, Mona el-Tijani. “This video was just one example of what happens all the time.”

Sudan’s justice ministry said it would investigate whether the punishment was administered properly.

It was not clear what offence the woman being lashed had committed. Officials from the ruling National Congress Party offered conflicting explanations in the local press.

So there we have it – another progressive muslim regime. You know a religion that claims to respect women and the minorities.

Sudan’s justice ministry said it would investigate whether the punishment was administered properly.

Does this remark not cause a shudder to run down your spine. It seems to be accepted the police have the right to issue summary justice in the form of sadistic and cruel floggings. No trials, chance of mitigation or anything else. The only issue for the Sudan justice ministry is whether the punishment was properly administered. From reading the accounts of the flogging in other media sources, it appears to have been a total of 53 lashes carried out in the most sadistic way.

So, protesting against cruel abusive treatment results in arrest and detention without access to legal advice. Filming the protest results in being assaulted and having your recording equipment seized.

If this was not enough, then this from Amnesty International

On 21 October ten individuals were sentenced to death by hanging for their reported involvement in an attack on a government escorted convey in Southern Sudan. The trial was flawed and the detainees were denied access to their lawyers and families, except for one occasion when they met with their lawyers for half an hour.

Four of the defendants are believed to be children. They were placed in adult detention facilities and tried together with the adult defendants. Only two of the four are thought to have been sent for medical inspections – in Sudan, many people do not have birth certificates, so courts sometimes rely on medical examinations to establish people’s ages. One of the young defendants, Idriss Adam Abbaker, was confirmed to be under 18 by medical examination and had his death sentence commuted.

The court did not look for further medical expertise to verify why Abdallah Abdallah Daoud was found to be under 18 by his first medical examination but not the second, and did not allow Ibrahim Shareef Youssif and Abdelrazig Daoud Abdessed to undergo the examination at all. This raises concerns about the arbitrariness of the process of determining the age of the defendants by the court.

According to UN estimates, around 300,000 people have been killed and more than 2.7 million displaced since 2003 as a result of the Darfur conflict. The conflict has been marked by large-scale violations of international human rights and humanitarian law, including war crimes and crimes against humanity.

The practice of arbitrary arrest and detention of Darfurians by law enforcement agencies such as the National Intelligence and Security Service has been rife in Darfur. Amnesty International has documented cases of prolonged detention without trial of Darfurians. Detainees have been subjected to torture and other forms of ill-treatment, unfair trials, enforced disappearance and death in detention.

The Convention on the Rights of the Child, the International Covenant on Civil and Political Rights, and the African Charter on the Rights and Welfare of the Child, all of which were ratified by Sudan, prohibit the passing of death sentences against juvenile offenders. Although Sudan’s 2009 Child Act changed the definition of a child to a person under 18 of age, it is of concern that the practice of medical examinations and the way they are conducted by courts in Sudan would still allow for suspected juvenile offenders to be sentenced to death.

If like me, you are appalled at this, then take action. Complain to your MP about the foreign aid being given. Join the Amnesty International campaigns following the link above. Don’t sit back and do nothing. A couple of emails can make a difference. You don’t even need to buy a stamp or print out a letter.