This week finds me in temporary residence at the Midland Hotel in Manchester as part of the work I am doing inspecting the CPS.

Last week was spent in Nottingham. That is a City that has a lot of memories for me. I still remember the Nottingham miners scabbing during the miner’s strike in 1984/5. I still remember  being forced onto the pitch from the main stand at the end of the 1986/7 season. I remember Steve Stone scoring a goal that meant we could not win the league. I spent a lot of time there in 1997-1999 as well as my ex lived there, so its a city I know well.

When I was at University, I travelled to Nottingham to see Newcastle v Forest, and it took me 3 days to get home! The joys of alcohol! I wouldn’t have minded too much but when my mother rang my student digs, someone told her I’d probably been nicked. Cheers mates!

It is an interesting place.It is the capital of the East Midlands and has a lot of government agencies there. [Apologies to  Derby & Leicester, but Nottingham is the premier city in the region]. There is not much to report about my few days there. Work, hotel, eat, sleep. Exciting stuff eh?

The only interesting thing was the Power Station case i referred to in my post last Monday/ Tuesday. It has been interesting to see how people are willing to jump to conclusions based on inaccurate and clearly one sided cases in the newspaper. The left wing Guardian has published a series of partisan articles on the case that are as clearly inaccurate as they are one sided. There is little attempt to report partially (Newspapers are under no duty to be impartial). Reading numerous message boards discussing this subject, it seems that people are too willing to jump to conclusions and not prepared to accept there may be other sides to the story. To even suggest this is to open yourself to hostile invective. The irony of it is that the people who are so narrow minded fail to realise that I am actually of a similar opinion to them about the overall issues.

This weekend I went to Newcastle to see Michelle & her family.

As ever, it was all to short a time period. Probably not helped by going on Saturday to watch Spennymoor play at Ryton in the Skill Training Northern League, which is 9 divisions below the Premiership! 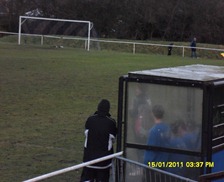 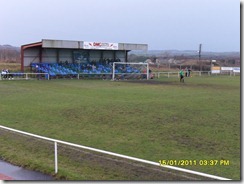 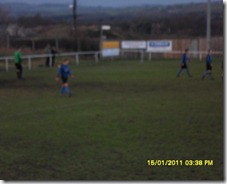 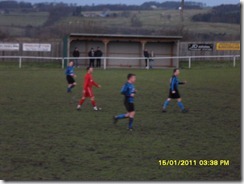 As you can see from the photographs, its not exactly a premiership ground and its not exactly a full house either. Spennymoor won 2-0 in a game ruined by the weather. The pitch was like a bog, and the wind was blowing at gale force down the hill. It made Spennymoor’s 2nd half attack down the hill ineffective. The wind blew the ball faster than anyone could run, so the ball kept going out of play. Good job Spennymoor got 2 in the first half against the wind. It was important for Spennymoor to avoid injuries as they are playing away at Cadbury Heath on Saturday in the FA Vase. I went to the game with Michelle’s youngest son and Michelle as well. I think Michelle had the right idea to stay in the clubhouse in the warmth all the game rather than stand outside and watch the game. I was still feeling the cold hours later when we were at home after the game.

After the game, Michelle and I had a night alone as her two boys were out on the town or with their Dad respectively. So, being the romantic type, I cooked Michelle a candlelight meal washed down with a bottle (or 3) of wine. When I say candlelight, I of course mean that no one had ten bob for the electricity meter so we had to use candles.

Michelle say’s I have to tell you the meal was no ordinary meal, it was an S&M meal for £10. That’s right isn’t it Michelle?

We followed up this meal with a session on the sofa – that is a session of snoozing through Saturday night TV! That is TV meaning television before your dirty minds think otherwise!

Sunday brought an early start for Michelle as that much put upon lady drove me into town for a 09:00 rendezvous with a pint or two of ale before the trip to the great unwashed. (See other post for more on this). Obviously, we had to avoid going on the special trains/ Metros that had been put on for Newcastle fans and went on the ordinary service Metro. Its a point of principle! The principle is to be an awkward git and apparently I’m good at it.

[The Stadium of Sh*te – can you spot the difference from Ryton’s ground?]

Back in Newcastle after the game, a few beers were had with the lads before Michelle drove into town to pick me up and take me home for a cracking Sunday dinner. That lady knows how to cook a meal

! If the way to a man’s heart is through his stomach, then Michelle has my heart with her cooking, never mind the rest of the way she looks after me.

Some of you will remember my post from 31st October 2010 The Fridges of Northumberland County . Well, being a good Inspector, a follow up inspection  was obviously needed to see if things have been rectified. I can safely say that the fridges of Northumberland County that I re-examined are definitely not dirty. They are also well stocked with lots of rather nice food. Following this theme, I can confirm that the laundry basket and the ironing basket are also kept well stocked

. Obviously, you will appreciate that I am unable to name the location of these items.

I have been told that I have to say that most of the items in the 2 baskets are my clothing and that I create more washing and ironing than the rest of the household put together – will you stop hitting me now please Michelle?

I left Michelle’s this morning to head down to Manchester for work. It was nice to have a relatively leisurely drive down to Manchester as I was not expected to start work before lunchtime. I even had time to pop into the supermarket on the way down to buy some green tea as both myself and my colleague drink that at work! What an exciting life I lead. I won’t advertise which supermarket it was, but “every little helps”. It also helps that there is an “Express store” next to the offices we are inspecting! Not hard to remember in those circumstances.

Manchester was of course where I spent 3 happy years as a student in the Hacienda and listening to the Smith’s. It is good to see a few old haunts

I just hope the CPS aren’t doing what The Smiths sing about.

People ask me is this blog true? All I can say is I’ve been a compulsive liar since I was a month old.

Who, what, why, where, when, what is he going on about.

Well, a certain rather fat and ugly man from Corbridge might remember this phrase from 31st October 2010. Why? This was Steve Bruce’s description of Newcastle United and its fans because at the end of the Newcastle v Sunderland game (which incidentally Newcastle won 5-1), the tannoy played The Monkeys’ “Cheer up Sleepy Jean”. A song incidentally which the Mackems released themselves as a record some years ago.

Strangely Mr Bruce didn’t use that description for those unwashed from Wearside whose idea of celebrating an underserved last minute equaliser in the return game was to invade the pitch, assault the Newcastle goalkeeper and throw numerous missiles at those of us in the away end.

Perhaps the ugly fat one was upset because his boasts in the press before the game to have a record to play when the Mackem’s won came to nothing.  So much for your boasting eh?

Steve Bruce to Name The Song?

All this from someone who repeatedly claims to be a Newcastle fans, but whose actions have repeatedly been to put Newcastle down throughout his time as a player and a manager.

Its rather pathetic and hollow to hear Sunderland Chairman Niall Quinn, Steve Bruce and other assorted Mackems making rather hollow apologies over the assault on Newcastle goalkeeper Steve Harper by a Mackem fan DURING the game.

Why is it a hollow apology? Well at ever single Derby game we have played at the Stadium of Sh*te when the Mackems have scored the great unwashed have invaded the pitch. it is also the second successive Derby at the Stadium of Sh*te when one of the great unwashed fans has assaulted/ threatened the Newcastle goalkeeper. You would have thought that by now, the so called family club would have taken appropriate steps to stop these pitch invasions and attacks on players.

“The vast majority of fans in the 48,000 capacity crowd behaved very well and we thank them for their loyal support.

“Sunderland AFC operates a zero tolerance policy towards anti-social behaviour of any kind within the Stadium of Light, and we are proud of our reputation as a family club.

“Working closely with Northumbria Police, we will ensure that appropriate action is taken against anyone found to have been involved in any such behaviour at yesterday’s game.

“The club also recognises the positive role Sunderland supporters played in helping to identify the small minority responsible for anti-social behaviour to stewards and the police.”

So there you have it in the 2nd paragraph– Sunderland AFC do not think pitch invasions or assaulting goalkeepers is anti social behaviour and they are proud of such actions.

Strange that the 3rd paragraph makes no mention of banning those on the pitch, only “appropriate action”. Wonder why most clubs ban those who invade the pitch or assault players, S*nderland praise them instead

The fourth paragraph praises the fans. Its incredible that this statement makes no condemnation of those who invade the pitch, assaulted the Newcastle goalkeeper or threw missiles, either this time or at any of the previous derbies at the Stadium of Sh*te.

Oh, and a point of order S*nderland. The referee identified the person who assaulted the keeper, not the great unwashed. Or are you suggesting the referee is a S*nderland fan – well actually, you have competition there as Liverpool think he is a Man U fan.

So Mackem Scum, Is this Decorum? 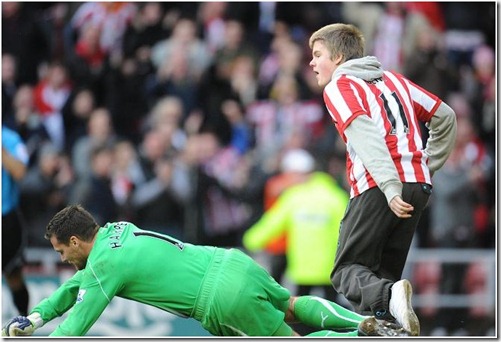 Oh and a quick message for Titus Bramble “SHE SAID NO TITUS, SHE SAID NO”.

Interestingly I see that Darren Bent  has decided he’s had enough of being at the great unwashed and a transfer to a club in the relegation zone (Aston Villa) is preferable to staying at the Mackems.