This weekend, instead of going to the Royal Wedding, I took Michelle off to Paris. The trip was a present to Michelle for her XXth birthday.

Paris is the city of romance so some people say. Numerous people go to Paris and one of the two gets down on bended knee under the Eiffel Tower. More of that later.

Anyway, continuing the theme, some male and some female were getting married in London on Friday. That however was not my number one priority. If Kate preferred him to me, then its her look out.

Anyway, Friday saw me heading to Kings Cross to meet Michelle with the intention of escorting her across the capital to the Eurostar Terminal the other side of the road. Well, the country folk may get easily confused in the big city.

I managed to turn up late for Michelle’s train arriving at King’s Cross. I think I had a valid reason, namely that I was at the off licence stocking up for the train journey. So, after begging forgiveness from Michelle, whilst admiring how good she looked in that lbd; we made our way to St Pancras station and found a Boots store to stock up on the toiletries I was supposed to bring from my bathroom cabinet. WHOOPS. My wallet was taught a lesson.

A visit to M&S for food. It wasn’t just food, it was M&S food. The 12:28 train to Paris left on time and we were whisked to Paris in only 2 bottles of wine. These journey’s are fast.

We had a hotel only 2 minutes away from the Gare du Nord which was the destination of the Eurostar. Check in at the hotel consisted of saying my name and being given the room key. No forms to fill in, no passport to present. Easy!

The rest of Friday consisted of drinking champagne to celebrate Michelle’s birthday and then a rather nice steak dinner and a few drinks in a bar near the hotel. The bar was an experience. I ordered a beer and got it with no problems. Michelle wanted a red wine, so in my best French, I asked the Thai barmaid for a “vin rouge” to be met by a puzzled look. Repeatedly asking for this produced no joy, so in the end I said “red wine” and she immediately understood. Bloody useless these foreigners, can’t understand the language of the country they are in!

Saturday was to be our one full day in Paris, so we got up early and left the hotel by 10:30! We got a 2 day travelcard for £10 each and made our way to see the sights of Paris.

We got the train to Chatelet Les Halles and decided to walk from there via the Palais De Justice to Notre Dame. It was beautiful walking in the sunlight to the River Seine and seeing the Palais de Justice. Now, in England, I’d like to think that Justice is not for sale. In France, it seems that is different. Look at the picture of the Palais de Justice

Yes, the whole building side is covered in an advert for perfume!

Anyway, we walked on to Notre Dame and on the way decided the best way to see Paris Would be to take the open topped bus tour, which we got after admiring the view of Notre Dame. We failed to see the hunch back though.

After Notre Dame, we took the open topped bus tour around Paris. This was a 2.5 hour trip that took in many sights including, The Louvre, The Place De Concorde (former site of The Guillotine), The Opera House, The Avenue des Champs-Élysées, The Arc de Triomphe de l’Étoile and of course the Eiffel Tower. Arriving back at Notre Dame at the end of the trip we went for lunch in one of the many restaurants in the back streets around there.

Michelle had the following for her dinner:

Any guesses what it was? Well, it was certainly delicious, or was that the garlic and tomato sauce they came in? Frogs legs.

Next up, we took the train back to the Eiffel Tower in order to see the place properly. Getting off the train and leaving the station, we found a problem. We were unable to find the Tower. Now, how it is possible not to see a 1063ft tall metal structure, I cannot explain.

It was after having bought the tickets for the trip to the top of the Tower that Michelle so wanted to do that I confessed my fear of heights! Well, if I had confessed it earlier, she would have felt obliged not to want to go to the top.

The views at the top were spectacular and there was no American fast food restaurant there! 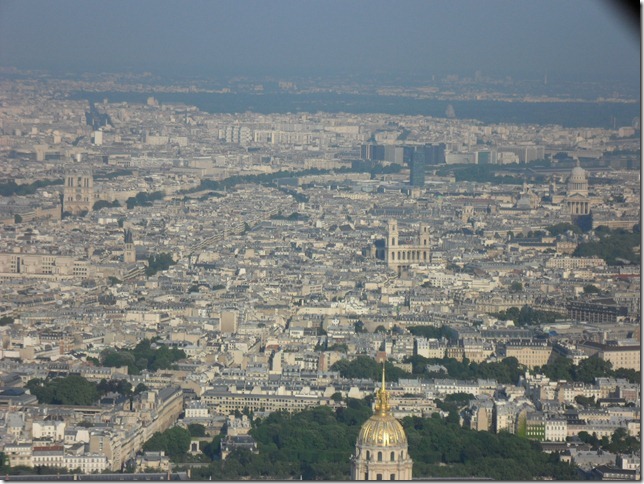 Michelle Looks more scared than me (or is that scared of me?) 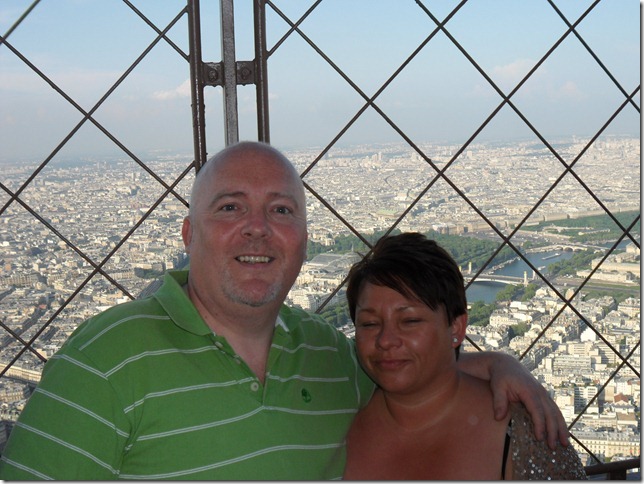 Saturday night, we returned to the hotel, got changed and went out for dinner. Before dining we found a nice little bar for a drink or two. Saturday night dinner is still awaited. We stayed in the bar till the end of the day as it was happy hour.

The choice was going here 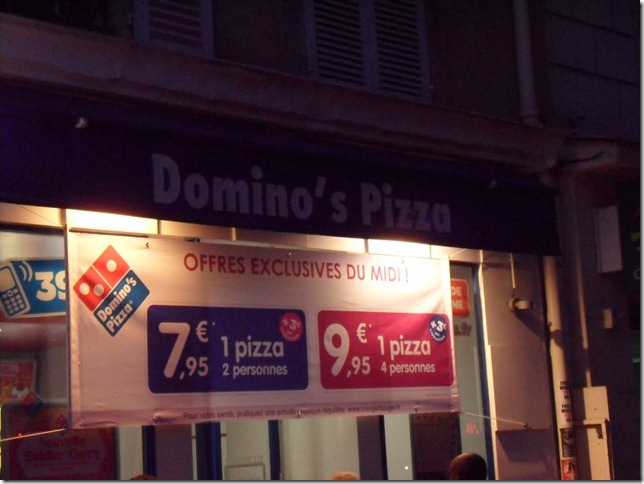 What’s that you say? An American fast food restaurant!

When we returned to the hotel, we discovered our neighbours were Kuntz, literally.

Sunday we were to be heading home in the early afternoon, so we decided to go to the Champs Elysees for a better look there and at the Arc De Triomphe. We walked the length of the Champs Elysees from Place De Concorde. It was a beautiful sunny morning, only spoilt by the dirt and rubbish on the street. This major tourist attraction still had all the food litter left on the street from the day before. I thought London was dirty, but compared to Paris it was clean. 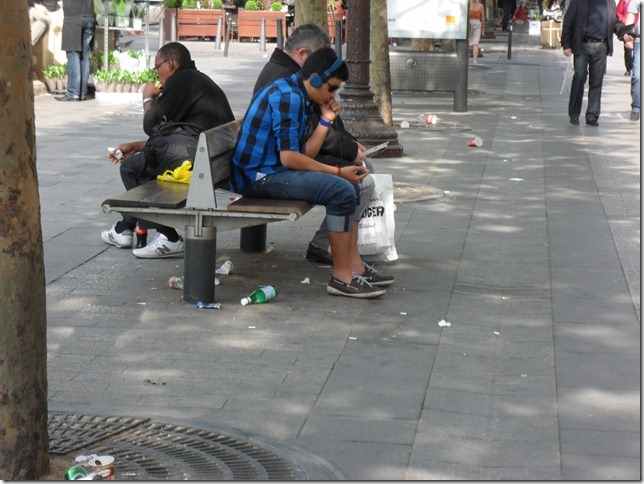 I decided to take a video clip of the state of the street. Just as I got my camera  out, a “street cleaner” appeared. His approach was bizarre. He knocked glass bottles off the wall so the smashed at Michelle’s feet! He then waved his brush near the glass and carried on. In the video clip below all I film has allegedly been cleaned by the cleaner.

We then found the main attraction on the Champs Elysees 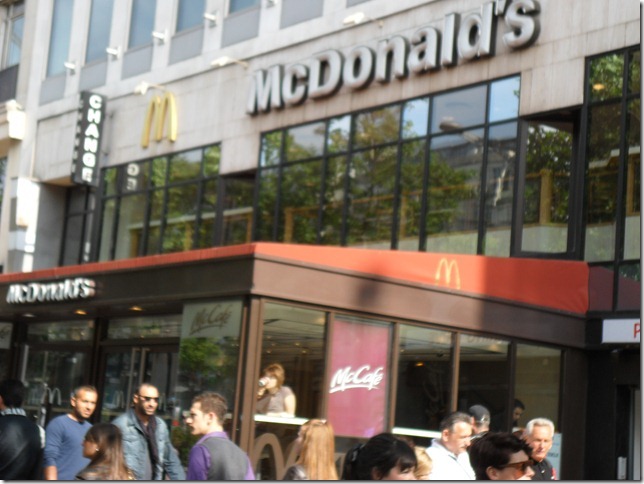 There were a few other interesting things in Paris

This restaurant near our hotel appears to have found a problem to the problem of immigrants by cooking and serving them. (I think that’s what the sign says)

Or how about buying yourself some new piles?

Or what about some specs?

Or even some “Apple of Pain”?

We did find this club on the Champs Elysees, but weren’t sure we would be allowed entry 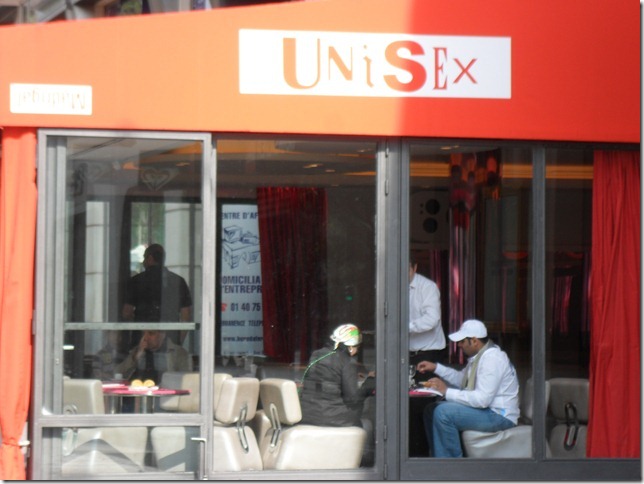 Now, if you know what this store sells, please tell me?

To celebrate our trip, we bought a few bottles of wine for the train trip home, but were very conservative and only drank one bottle. Why? Well they were all cork tops and we had no corkscrew. We managed to get one opened, but had to make do with water after that.

So we drank them when we got home before popping down the Irish Bar for a few more drinks and a good old fashioned Chinese takeaway.

Sadly Monday saw Michelle heading home. I did try to persuade her to come to the US with me, but she made up some excuse about having to look after her son, her dogs and having a job to go to…..

Anyway, now hopefully you will understand the title of this post.