Just after writing my last blog post, I went to the business centre at the hotel to use their Wi-Fi and guess what?

The building had to be evacuated because of a fire alert. Just what you want at midnight! Fortunately there was no fire and after the building was checked by fire brigade we were able to return.

Finally before I go to bed- some statistics from the ride

Thursday was another day with no chatting to Michelle

but we did text.

After arriving in Annapolis last night, the mood lightened on the Police Unity Tour  [PUT]. No food was provided for riders and we had to sort ourselves out. This is partly because it is a chance for people to let their hair down and relax as the last day was only around 35 miles long.

I will talk about the ride later, but tonight, I met two ladies who reminded me what this ride was about. Usually, each rider rides in memory of a specific officer who has been killed. Each rider wear a wrist band giving details of that officer’s service and the End of Watch date (date of death). Michael T was riding in memory of an officer from Alaska who was the first legally deaf officer in the US Police Service. Tony was based on an island in Alaska state. The force on the island consisted of only 3 officers. Tony’s mother saved up to visit him in Alaska and was accompanying him on a drive in the patrol car. Tony contacted his fellow officer and invited him to meet Tony & his mother. Just as the 2 groups met up, a gunman opened fire, killing both Tony & Matt in front of their respective families (Matt’s kids & Tony’s mother [D]). It was left to Tony’s mother to call in the incident on the police radio. A truly horrific situation.

Sadly the story gets worse. Tony’s boss claimed compensation alleging he had injured his back in moving the bodies when he was not there. This is to be the subject of a forthcoming trial and Tony’s mother will have to give evidence in this trial.

Somehow D slipped through the net of COPS (Care of Police Survivors), possibly as the murders were in Alaska and she lives in Florida. She received no support initially. Then D’s mother also died. This was all in the space of a few months.

After Michael learned of this incident, he and Lisa (Canadian rider) made contact with Debs, arranged for COPS to provide support for D and both also separately visited her in Florida. With the support and encouragement of Michael and Lisa, D was persuaded to come to DC for the Candlelight Vigil and survivors service. D came with Tony’s girlfriend [C].

The two ladies came to the ceremony today when the PUT arrived at the National Law Enforcement Officers Memorial [NLEOM]. Craig Floyd the CEO of the NLEOM paid tribute to D in front of the crowd there.

Tonight, Michael, Lisa and I went for dinner with the two ladies. Their grace and humility was incredible. I felt humble to be in their company and to be hopefully able to offer them some comfort. They are incredible ladies coming to terms with a horrific situation that no one should ever have to face.

The slogan on all our cycling jerseys is the motto of the ride. WE RIDE FOR THOSE WHO DIED. It says it all. It says so much about their character, that police officers in the USA are facing death every day doing their jobs to uphold the rule of law.

Sadly in the 4 days of our ride, some three officers were killed whilst on duty across the USA. The total this year is I believe 69 officers killed. That is around one officer killed every 53 hours.

After that, the details of the ride pail; into insignificance.

You may think that being a short distance it was an easy day. However, we had the hilliest day per mile ridden. As I had done the tour last year I knew what was coming. I was a little concerned as I am not as fit as last year and heavier, so expected to struggle on the hills.

I am pleased to say that I managed to ride up the hills without a great deal of problems. I was at the front of the ride for most of the day. The hill that caused me so many problems last year was climbed with none of the problems I had last year. I think this is because I managed to select  the correct gears at the appropriate times.

I only once got into trouble on a hill. I was struggling a little and starting to lose touch with the leading group, but the support and camaraderie of the fellow riders kept me going and in with the front group. Police UNITY tour is a very apt description. 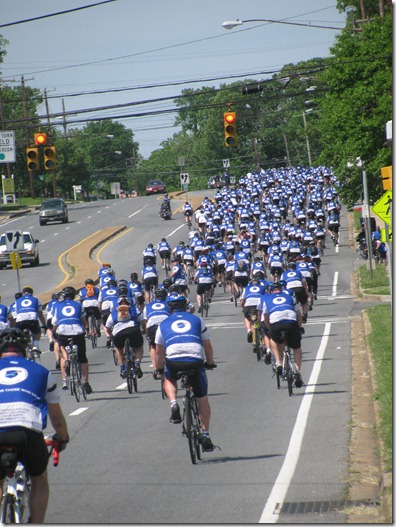 We had a stop at another Target store just outside Washington after only 19.6 miles. This was to be our last stop before arriving in Washington DC. After the stop we rode into the RFK stadium and waited there for the other rides to arrive.

The wait in the car park was a good chance for meeting up with friends and swapping stories and generally relaxing after 4 days of riding together. It was a chance to meet some police officers in a different way! 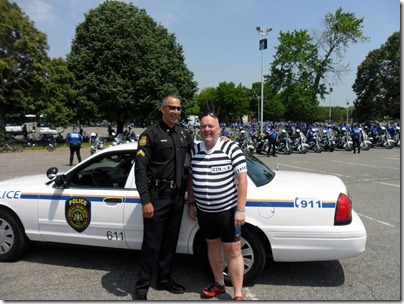 US POLICE WELCOME ME TO DC

I found the bike that was made for me in the RFK car park – both the number and the description were made for me – or so I am told. The bike belonged to Jenny one of the ride marshals who is brave and strong enough to do the whole ride on a fixed wheel bike – chapeau to Jenny.

Once all the other rides had arrived, we rode into the NLEOM 2 by 2 , all 1400 riders. The crowds lined the route near the memorial, being ordinary officer workers, families, relatives and friends of riders and most importantly the survivors. It is a moving experience. 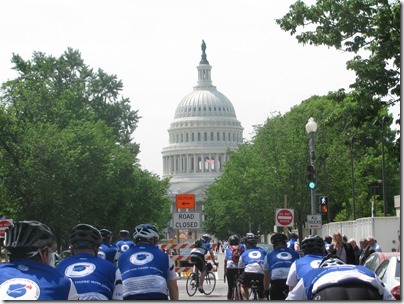 FIRST SIGHT OF THE CAPITOL BUILDING 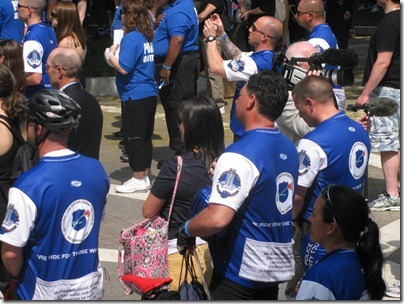 At the Ceremony after we arrived at the NLEOM, we learned that this year’s ride had raised a net total of $1,500,000. A truly incredible figure and one of which each and every rider and helper can be proud of.

After the ceremony, we collected our ride medals which I will treasure along with my 2010 medal. 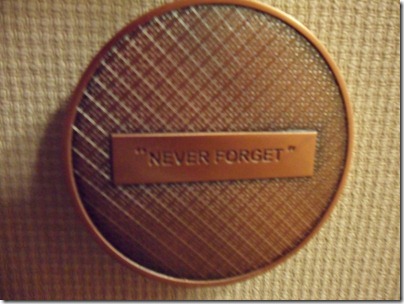 After getting my medal, I bumped into one of the motorcycle riders. He is known to the cyclists as “2 by 2” as last year he was constantly using his microphone to broadcast this and other things such as “Riders remember to hydrate or you will die”. He also had a word for the day and would use this in sentences whilst escorting us. He is a legend and a great bloke. 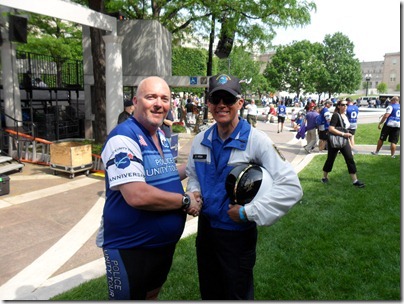 I want to end this post by saying thank you to all the volunteers who helped make this ride not only possible, but also probably the most successful ride ever. our luggage was transported to our rooms each day, hotel rooms sorted for us all, roads closed, traffic stopped, food arranged, refreshments provided. Also, let me thank each and everyone of the people who sponsored me. Your money has all gone to the PUT. Some people seem surprised that I did not use sponsorship monies to subsidise my travel costs. I am proud to have been allowed to take part in this ride and would never consider using any of the money raised by sponsors for anything other than the ride. The cost of getting to the USA is a small price to pay to take part in this event.

Tomorrow, it is a day of reflection and sightseeing before heading to the Candlelight Vigil at the NLEOM.

Finally, any suggestions as to what Lisa was inviting Michael to do in this picture?