For my second ever MLS game I went to PPL Park the home of Philadelphia Union. The ground is not actually in Philadelphia, but in the town of Chester PA. This is about 15 miles from the centre of Philadelphia. 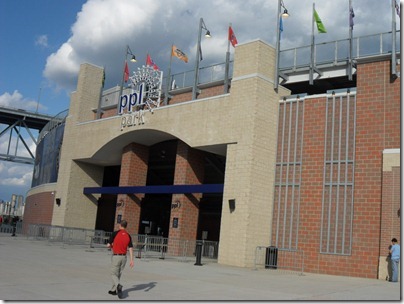 Having done my research, I knew that Philadelphia get home gates of 18500 or so in a ground that holds around the same. I therefore went to the ground early to get a ticket for the game. Arriving some 2-3 hours before kick off, I discovered that the ground was in a rather down market area of town. Apparently the ground was built here to try to regenerate the area.

Car parking at the ground was $20! I was not going to pay this until I knew I could get a ticket at a sensible price, so a quick chat with a steward and I was directed to park my car on a roadside verge near the ticket office whilst I went to get a ticket. I got my ticket and decided to leave the car where it was. Parking saving $20.

After getting my ticket, the question came about what to do next? I chose to have a look around the ground from the outside. This is a purpose built ground and only in its 2nd season. Most MLS clubs are using stadiums originally built for other sports. This ground is built on the banks of the River Delaware and there are no facilities nearby. No shops, bars or restaurants etc.

The club shop at the ground was my first port of call. This was stocked with the usual football club stuff, shirts, t shirts, hats, scarfs, mugs, key rings etc. It was staffed by rather ignorant staff who were unable to answer which of the three Philadelphia kits on display was the home kit. The kits all have a shirt sponsor “BIMBO”. Hopefully they do not have a women’s team! Bimbo is apparently a firm of bakers. 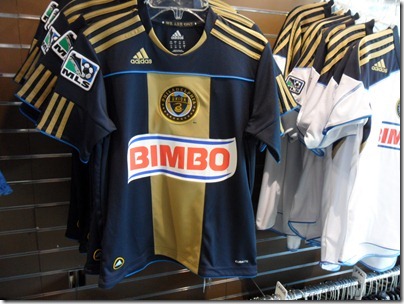 Immediately outside the ground there are a number of stalls and a children’s play area. There was even a band playing on a stage to entertain the crowds. 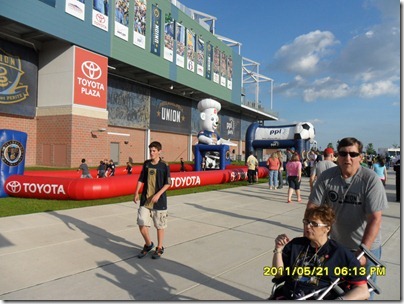 In the nearby car park, many people were tailgating – i.e. having BBQs and picnics. At the far side of the car park, I could see a number of gazebos and a crowd gathered, so I had a wander over there.

There was a DJ there and a couple of stalls selling T shirts.

This it turned out was a gathering of a group calling themselves “The Sons of Ben” – an apparent reference to Ben Franklin. I understand this is the Philadelphia supporters club who are styled on the Italian Ultras. They occupy the members only section of the ground called the River End. There was a large BBQ and beers or cans of pop there. This all appeared to be free. There was nothing to stop me going into the section and chatting with the members. It would have been rude not to make the most of the hospitality on offer in the form of food and beer. [ I’ve since googled them and it seems they are an official supporters group and it was a members only event– whoops]

Onto the ground and the game itself. The ground is a very new single tier ground with the two sides covered and both ends open. There is an electronic scoreboard on each side and a big screen TV/ scoreboard on one end. The River End is the home of the Sons of Ben and is where all the noise comes from. There is even an away fans section (if needed) in one corner! Not many travelling fans when some teams are 5 or more hours away BY AIR.

The announcement of the names of the Chicago team names was greeted by the chant “sucks” after each name. The referee was invited repeatedly to “suck my balls” after controversial decisions. In fact, everything seems to suck in Philadelphia.

The game itself was a lively affair and ended 2-1 to Philadelphia with the winner being a great strike from 30+ yards out. Both teams seemed to lack a decent striker, so I suppose Emile Heskey would fit in well in the MLS.

They take drinking seriously and expect under 40s to provide proof of age before they will serve drink in the ground! 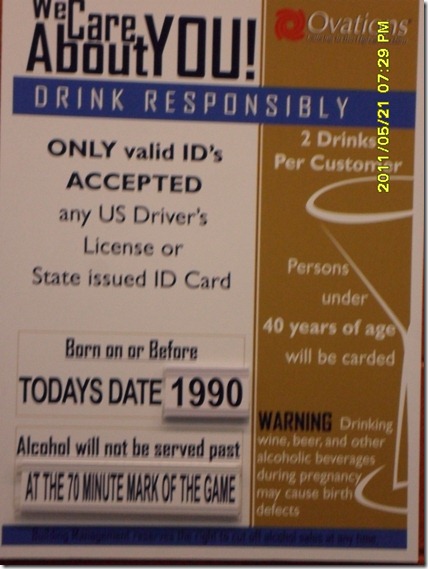 good job I wasn’t under 40 as my driver’s licence is UK issued, so I would not have been able to get a beer.

Just my luck that I ended up next to the Scottish section!

English Fans (above) & US Fans (below)

Now tell me which looks better