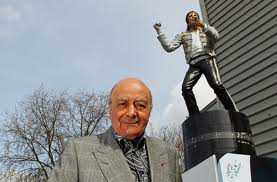 After the lengthy summer recess, football is back. The 2011-2012 Europa Cup campaign kicked off last night. Yes 30th June! – before schools have broken up for summer, even before England have lost a Test Match & we are starting the new season.

I took the opportunity to watch Premiership Fulham beat a team that would be lucky to survive in Blue Square North (level 6).

Why did I go? Well partly because it was cheap – £5 and partly to see friends. I expected it to be like old times watching Fulham play in front of 3men & a dog, but was surprised to find a crowd of 14,910 there. (No, I did not count them all!)

The game was played on a very humid night & the sun was still shining until nearly full time. It was perfect weather for a few beers, but as this was a European game, no alcohol was allowed to be sold. 😦

The game itself showed that Fulham had only started pre season training this week. The fitness levels were not the best. Fulham won without ever getting out of 1st gear.

A noteable exception to the above was the performance of Bobby Zamora who picked up where he left off last season. As the song goes:
When the ball hits your head
& you are sitting in row Z
That’s Zamora
He has lost none of his ability for missing the goal.

The good things for Fulham were no injuries, bookings or goals conceeded.

The good think for me was it was football & its back.

The bad thing was it takes nearly 2 hours to get home from Putney Bridge. 2-3 tubes, a train & 2x20minute walks 😦

The ugly was not seeing Lee, but was seeing that statue of Michael Jackson on the back of the Riverside Stand. Why? What’s it got to do with Fulham?

Well where is next game?

2 thoughts on “Football is Back”