The observant of you will have noticed that I haven’t posted much lately. The reason? Well, I have spent the time sitting/eating/sleeping on the sofa watching re runs of Jeremy Kyle & entering Lorraine! (Ooh err missus!)

Now there may be an element of truth in some of that but you’ll have to guess which is true. BTW I’ve not heard from Lorraine since entering her (on 2 separate occasions!) I’ve also entered Billy Connolly as well but he’s still inviting people to enter.

I am of course talking about competitions on their TV programmes. What DID you think I meant?

Right then, since my last post, I have been back to Brighton for a day, this time with Michelle. We had a great day, recovering from the previous night’s glass of ribena & the hottest chilli sauce I’ve had on a takeaway! I know you won’t believe me but I had to throw away my chilli chicken as it was too hot for me to eat. Michelle suffered similarly with her food.

Brighton never ceases to disappoint me. I’ve been numerous times but never seen Sting working as a bell boy, nor have I seen Mods & Rockers fighting there!

Anyway, after fine dining in Wetherspoons, we went for a walk along the seafront. Walking a couple of miles & coming across the end of the London to Brighton off road bike ride. Why they want to ride off road when there is a perfectly good road running to Brighton, I don’t know. Seeing how dirty they all got, I’ll bet their wives/girlfriends/mothers also think they should ride on road.

There was a food & drink festival on the seafront. So we had a look at that. There was a stall selling chilli sauce which had a spice rating of 1-10. They also had a sauce rated 30/10. That had to be tasted. Michelle had a tiny drop the size of a pin head on her finger & I had some on a cream cracker. To say it was hot is an understatement. It made the prior night’s food seem tame. Michelle’s finger stained & she claimed to have burned a hole in her tongue. I had no feeling in my lips.

The remedy? That bar on the seafront with half price drinks from 5-8pm! Stella @ £1-15 a pint. After 10 pints I still had no feeling in my lips but I couldn’t care less! We staggered up to the bar near the station. Well I think we did as we ended up there for a couple more before the train home.

Sunday brought more glorious weather & some rushing around to get my old phone unlocked so we could pass it on to Josh as it was his birthday on the Tuesday! Happy Birthday Josh!

The rest of the week brought nothing exciting, just work. At least being in the office, I got to cycle to work everyday! First time – have cycled to/from work on 5 successive days for a while.

Saturday 1st October was my brother’s birthday. Happy birthday Martin! There was a family get together for that, but @ nearly £200 for last minute tickets, I didn’t attend. Michelle & Josh did go in my place & got Martin the most fabulous cake made specially for him by WENDYLICIOUS. The cakes that lady makes are awesome. I recommend you to get her to make one for you.

So whilst all the family were in the North East, I was at the cycling club at Hog Hill (www.lvycc.co.uk). I actually got to ride my bike there instead of just helping out on the bike hire.

Saturday afternoon, I went to see the O’s against in form Preston. The afternoon started badly when I got lost trying to find a particular pub. Phone Sat Nav kept taking me back & forth past the tube station, so in the end I gave up!

So Orient haven’t won a game all season & Preston have won all their last seven games. Preston took the lead after 3 minutes & for the next 20minutes it was all Preston. Was that the pub I hear calling me?

Then amazingly, Orient scored twice to lead 2-1 @ half time. Then when Preston missed a penalty early in the 2nd half, it seemed it could be Orient’s day! They held on to win 2-1 & record their first win. It was even more pleasing as the orange mackem Phil Brown is their manager & I take great delight in seeing him fail. We Newcastle fans still remember May 2009!

Whilst this was going on, Newcastle were winning 2-1 away @ Wolves & even more importantly, Spennymoor were winning away in the FA Cup @ a side 2 divisions higher. Thanks to modern technology & the kindness of David Glenn, I was kept up to date with all the events in Spennymoor’s game via twitter & even had video clips of goals during the game.

This added to England beating Scotland & sending them home from the Rugby World Cup made for a good day sporting wise!

Sunday brought a leisurely day for me, so I decided to visit that home of culture (growing on the burger stall) & no class known as Dagenham Sunday Market. You may recall my post earlier this year about it!

I am pleased to say it doesn’t disappoint. The day was hot, so the tattooed ladies were out, you know the sort, wearing their size 12 clothing on their size 22 bodies! 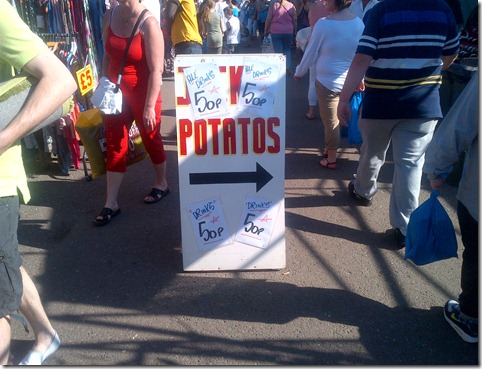 The busiest stall there was selling rolls of artificial turf, in the same way as stalls sell carpets! Classy, I think not. 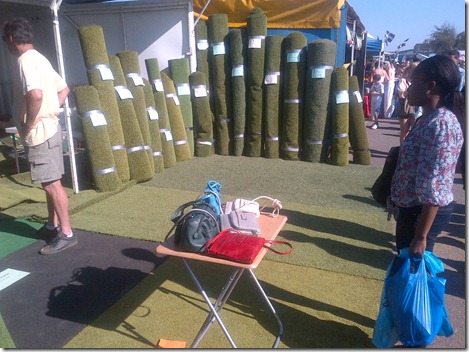 On Sunday afternoon, I went to watch Waltham Forest v Eastbourne Borough in the FA cup. See my separate ground hopping post about that.

This week, I notice that autumn is finally here with a vengeance. The leaves are squashed on the roads & its dark enough to need lights on my bike for my commutes to & from work! Mind you we are over half way from the longest to shortest days. The clocks go back later this month. Time to dig out my winter cycling kit, check the batteries for my lights etc.

Talking of bike lights why do some people insist in riding in the dark with no lights on? Are they suicidal or do they think they are invincible?

Then there are those even stranger people who think they should put red lights @ the front & white lights @ the rear. WTF is that about?