Well this weekend brought a bit of a role reversal for me. Instead of my parents looking after me and taking me out places on a weekend, they came down to my house for the weekend. It was my turn to look after them.

I believe it was over 10 years since my parents had stayed down here at my house. The big bad city is too much to take for those from the sticks. The idea of electricity and running water is a frightening prospect!

I’m being a bit unfair as they have been down to London in the last 10 years but just not stayed at my house when down here. Apparently Chez Spen doesn’t have enough stars for their liking. I think they are wrong, this place has at least 8 stars, and you can see them through the hole in the  roof above the bed in the spare bedroom. Even so, its warmer and more welcoming than my old place in Northampton that had a tendency to get flooded. Still, Northampton did provide some good memories.

So, those days out at weekends in the past when my parents took us up the Northumberland coast, or to Witton Le Wear or wherever are reversed and it was up to me to entertain the old folks.

Friday afternoon brought them heading down to London on the train and I met them off the train at Kings Cross to escort them to my home. Now I thought I’d cycle to work and collect my bike on Sunday when I dropped off my parents at Kings Cross – all sounds good doesn’t it? Well read on about this….

So,  my parents arrived on time at Kings Cross. I think they were a little shocked to realise that the train wasn’t steam hauled. Anyway, we made our way round to Ilford and my home. We just had time for a quick wash and brush up before friends of theirs were coming round to see them and go out for a meal together. Tony & his wife Dianne are people my parents know through cycling. My dad and Tony met cycling for Great Britain in the Peace Race between Warsaw, Berlin & Prague. Tony and his wife live down near me, but  rarely get to meet up with my parents these days, so it seemed an ideal chance to meet up.

Tony is still racing and was heading off that night to Maidstone and an early start from their for 2 days racing in Belgium. Living in the South East means it is relatively easy to find a race for his age group either in this area or a short hop away in Belgium or France. Sadly not something available to those living like my dad in the North East – see dad, I told you the South East has some plus points…..

We went to a local pub that has a reputation for good steaks. The Dick Turpin pub named after one of the most famous locals. I have to say that both the food and the service was excellent. A place to visit again. Its several years since I had been there and I would hope its not so long till next time I dine there. Guess where we’re going Michelle? 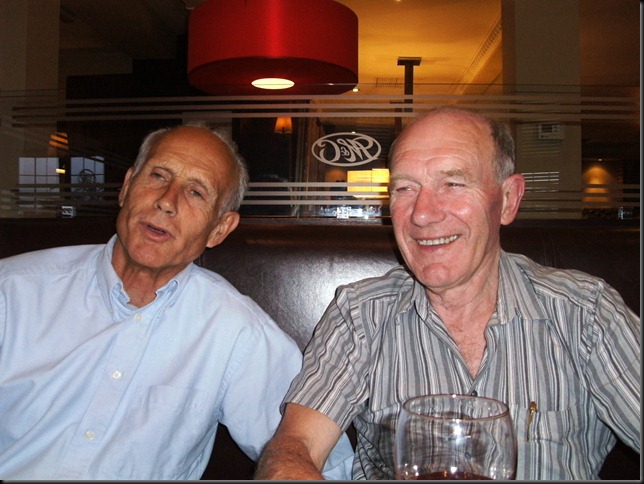 Whilst the 2 former team mates reminisced, I got the job of entertaining the ladies. 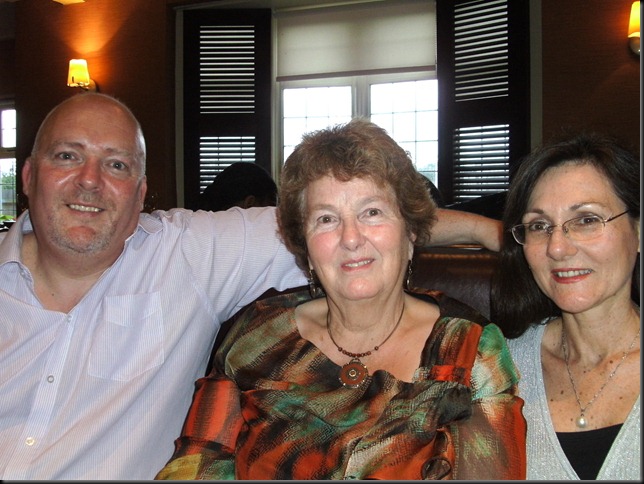 Saturday was a bit of a wash out weather wise. We had planned to go up to Central London via Greenwich ending up in Green Park so my dad could see the Bomber Command memorial. Sadly the weather meant this was not going to happen. The rain was torrential all morning. It was so bad that we didn’t leave the house until lunchtime.

Re- arranged plans were to pop to Tesco’s to get some milk and so I could visit the opticians. Simple enough you’d have thought, and so did I. As we walked into the store, there was some water on the floor. The roof leaking? Customers dripping water into the store? No, it was sewage from the drains flooding the store from the Tesco Direct section of the store. By the time we had got a coffee in the Cafe, the store was being closed and customers were having to leave via an emergency exit as the main door area was now under several inches of sewage.I’ve always thought that Tesco was a sh*t store and it seems that I have been proved correct.

So from Tesco we went to Wickes so I could get some supports to fix the stairs and stop or reduce the risk of people falling through the broken step. Then we went to Aldi near Romford, or attempted to go there, but it was closed due to flooding. So we headed home via PC World and the several sections of flooding on the main A12. Its amazing to see what problems a morning’s rain can cause to the region, whether buildings or roads. Despite all these problems, the river behind the house came no where near to bursting its banks.

The rain eased off on Saturday night, so after an afternoon watching the Tour de France, we headed out for dinner. Now, I should point out that I had cooked a meal for us all, but my folks would prefer not to eat my cooking. I’m mortally offended

, or to put it another way, I’ve got my lunch for the week sorted now

Before heading out for dinner, we had a bottle of champagne and my father had a smashing time, accidentally breaking a champagne flute in an unfortunate accident. Not to be out done, my mother managed to permanently stain one of my cushions. Not a little stain, but a large 3” diameter red/ black stain 9n a white cushion. How? No idea.

It did however fulfil a promise my parents always used to make when I was a child. Back then, if anything ever got broken in their home by me, they would say that when I was older and had my own place that they would come round to it and trash my home and possessions. It may have taken them many years to get round to it, but they can always be trusted to stick to their word. Now, I should be fair and say the champagne glasses cost me nothing and the cushion cost £2 so the value of the damage is minimal.

Actually, we went to a restaurant I’ve been to once before. Its a great Thai restaurant called the Elephant Royale in nearby Gants Hill. The food here may be pricey, but it is excellent quality. I cannot recommend it enough. (Michelle, if I can save up the money, I’ll take you there)!) 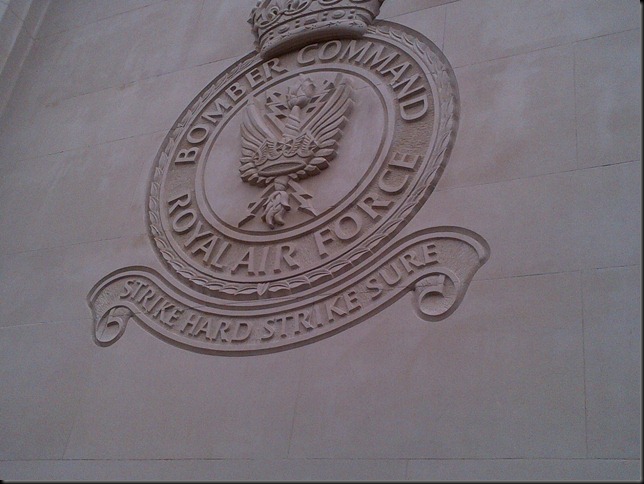 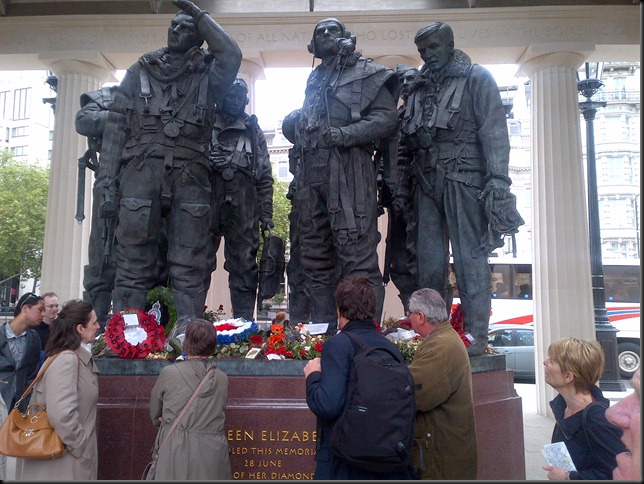 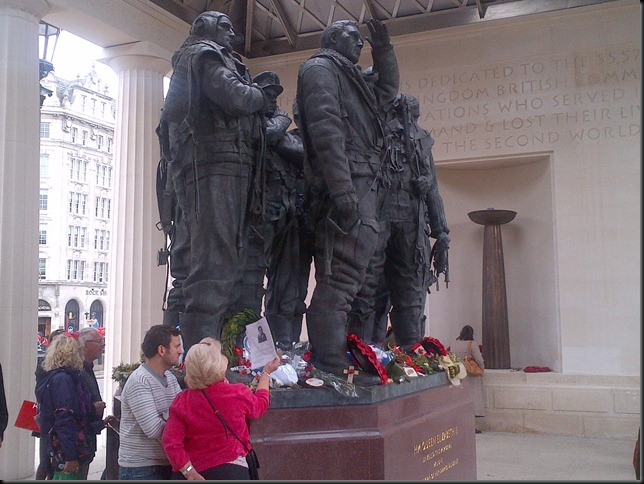 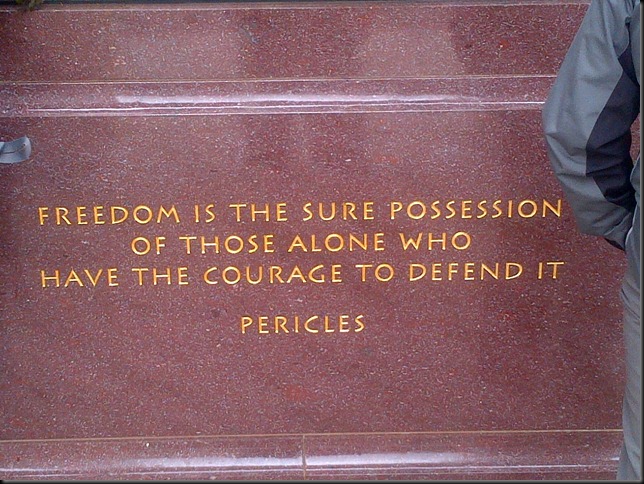 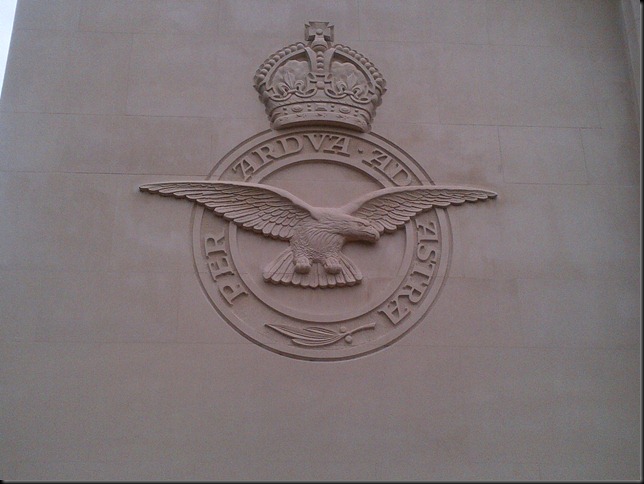 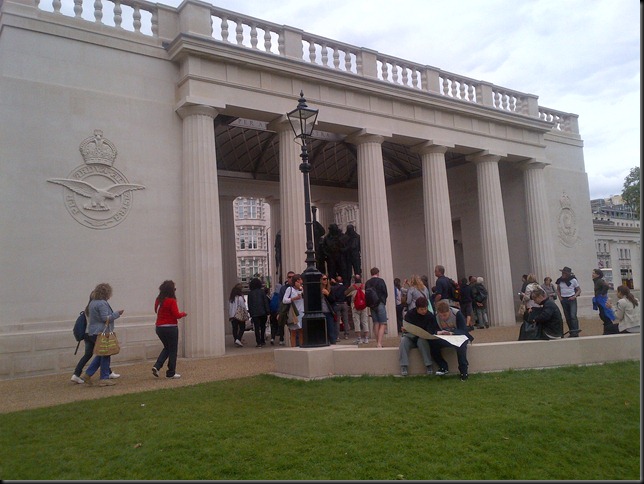 A long over due memorial to the bravery of these men.

On the roundabout nearby at Hyde Park Corner there are memorials to all the Australian and New Zealand troops who fought in WW2. Of course, there is also the Wellington Arch and Statue to one of the greatest ever Britain’s, The Duke of Wellington.

Also there was the following memorial, now looking weather worn, but no less moving 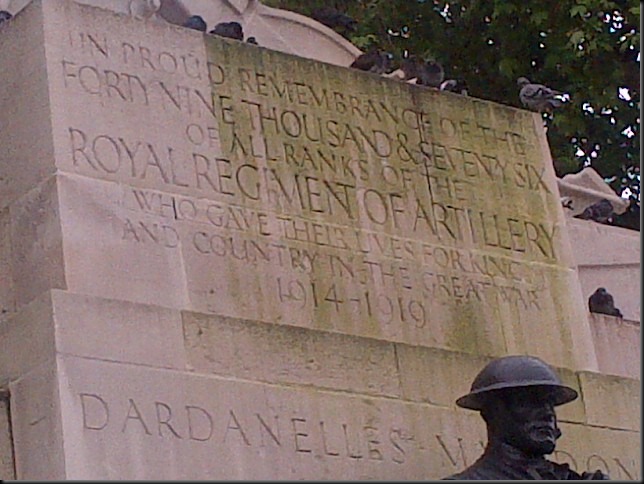 Within a few hundred feet, there are all these memorials reminding us of those who within the last 100 years fought and died for our freedom. Let us never forget them

With proud thanksgiving, a mother for her children,

England mourns for her dead across the sea.

Flesh of her flesh they were, spirit of her spirit,

Fallen in the cause of the free.

Sings sorrow up into immortal spheres,

There is music in the midst of desolation

And a glory that shines upon our tears.

They went with songs to the battle, they were young,

Straight of limb, true of eye, steady and aglow.

They were staunch to the end against odds uncounted;

They fell with their faces to the foe.

They shall grow not old, as we that are left grow old:

Age shall not weary them, nor the years condemn.

At the going down of the sun and in the morning

We will remember them.

They mingle not with their laughing comrades again;

They sit no more at familiar tables of home;

They have no lot in our labour of the day-time;

They sleep beyond England’s foam.

But where our desires are and our hopes profound,

Felt as a well-spring that is hidden from sight,

To the innermost heart of their own land they are known

As the stars are known to the Night;

As the stars that shall be bright when we are dust,

Moving in marches upon the heavenly plain;

As the stars that are starry in the time of our darkness,

Next it was onto Covent Garden for dinner and then to my work to collect my bike and being efficient and organised, I brought in shirts and underwear for the week ahead. See, I can be organised and efficient. I then took my parents to Kings Cross and said a fond farewell to them. It was far too short a visit.

Today, I was up and cycled into work. So, after my shower I put on my nice clean shirt and underwear, then realised my trousers were left at home – not to worry I had a spare pair at work. Sadly, the same could not be said for my shoes, jacket and belt that were all taken home on Friday when I met my parents. Organised and efficient? Not me.

So, what have I learned this weekend?

Finally, if my parents are reading this, use your railcards and book another trip back down here ASAP. I’d love to see you down here again.

2 Responses to Parent’s Tell the Truth?