As I was working in Liverpool this week, I thought I’d use the opportunity to take in a game in the North West. I saw Morecambe play at their old ground Christie Park way back in around 1981 or 1982. Since then however, things have changed. Morecambe have seen several promotions and are now a League 2 team playing in a new purpose built ground THE GLOBE ARENA on the outskirts of Morecambe. Bishop Auckland find themselves back in the Northern League as they were when I saw them at Morecambe ( having been promoted and relegated from the Northern Premier League) they to have a new ground which I visited at the end of the 2010/2011 season when their pitch resembled a beach. I’m told it has improved since then. it will need to as it is hosting both Bishop and Darlington games this season.

Anyway, Morecambe is only 65 or so miles up the motorway from Liverpool, so I took a drive up after work and followed the signs for the Isle of Man Ferry through Lancaster and into Morecambe. Arriving at the ground, the only parking on site is for ticket holders, so it was a case of finding street parking nearby. This was easily found, but in a rather unfortunately named street. 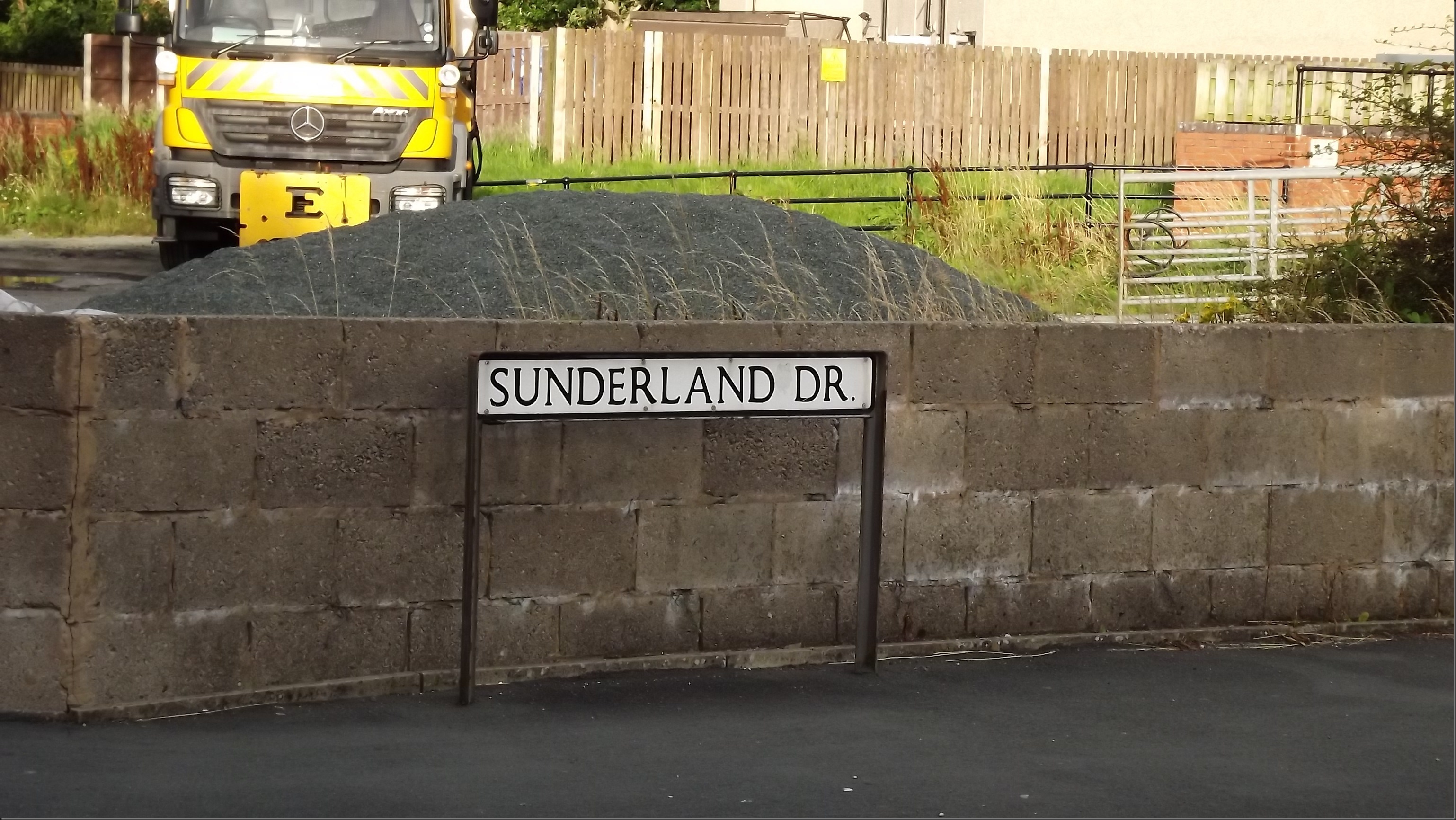 Arriving at the ground, there was a very laid back friendly atmosphere. In the second of the photographs below, you may notice that one of the stewards is using a walking stick. This suggested to me that there is rarely if ever any form of trouble involving Morecambe games.

Rather unusually for a relatively new ground, it is approached via some wasteland separating it from the main road. There is also motor vehicle access and numerous car parking spaces at the ground, including spaces for away coaches, directors of the away team, and more disabled spaces than I have seen at a football ground since Chelsea and Coventry used to allow people to park invalid carriages alongside the pitch back in the early 1970s. Instead of their being a lack of provision for disabled people at this ground, I did wonder if they have provided too much in terms of car parking

The other unusual feature of the outside of the ground was the provision in 3 of the 4 corners of covered bicycle parking. This was clearly appreciated by the fans as several bicycles and motor cycles were parked in these stands. This will hopefully reduce the people driving to the game and therefore reduce parking and congestion issues around the ground.

The ground itself consists of 1 large-ish stand running the length of the pitch and seating 2200 people. It has the changing rooms underneath it. There are a small number of executive boxes there as well. The visiting fans get one end of this stand as well as the small covered terrace behind one goal. The other goal has a larger single tier terrace behind it which is covered and forms the home end. For a small crowd, the crowd at this end were able to make a considerable amount of noise. 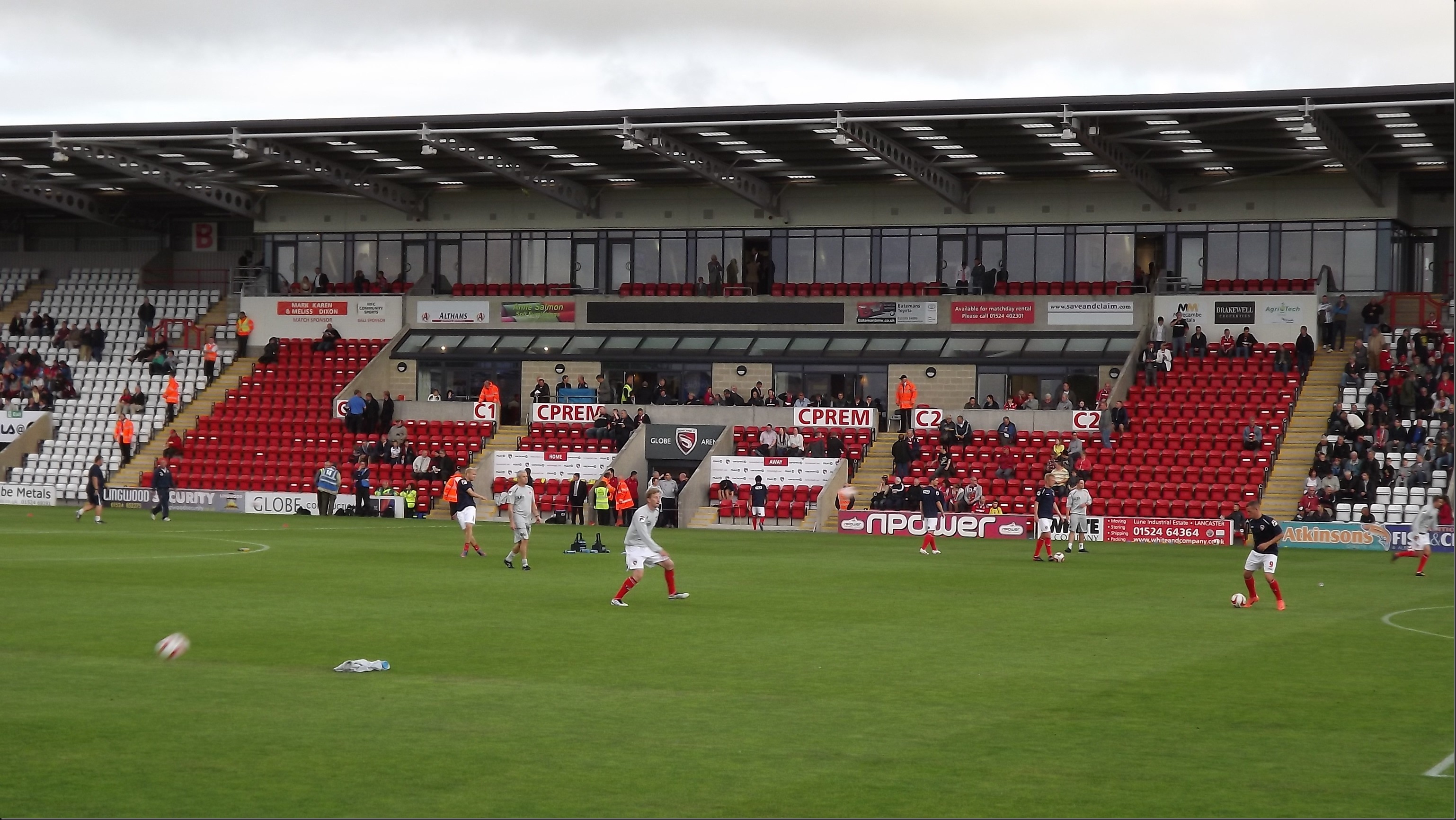 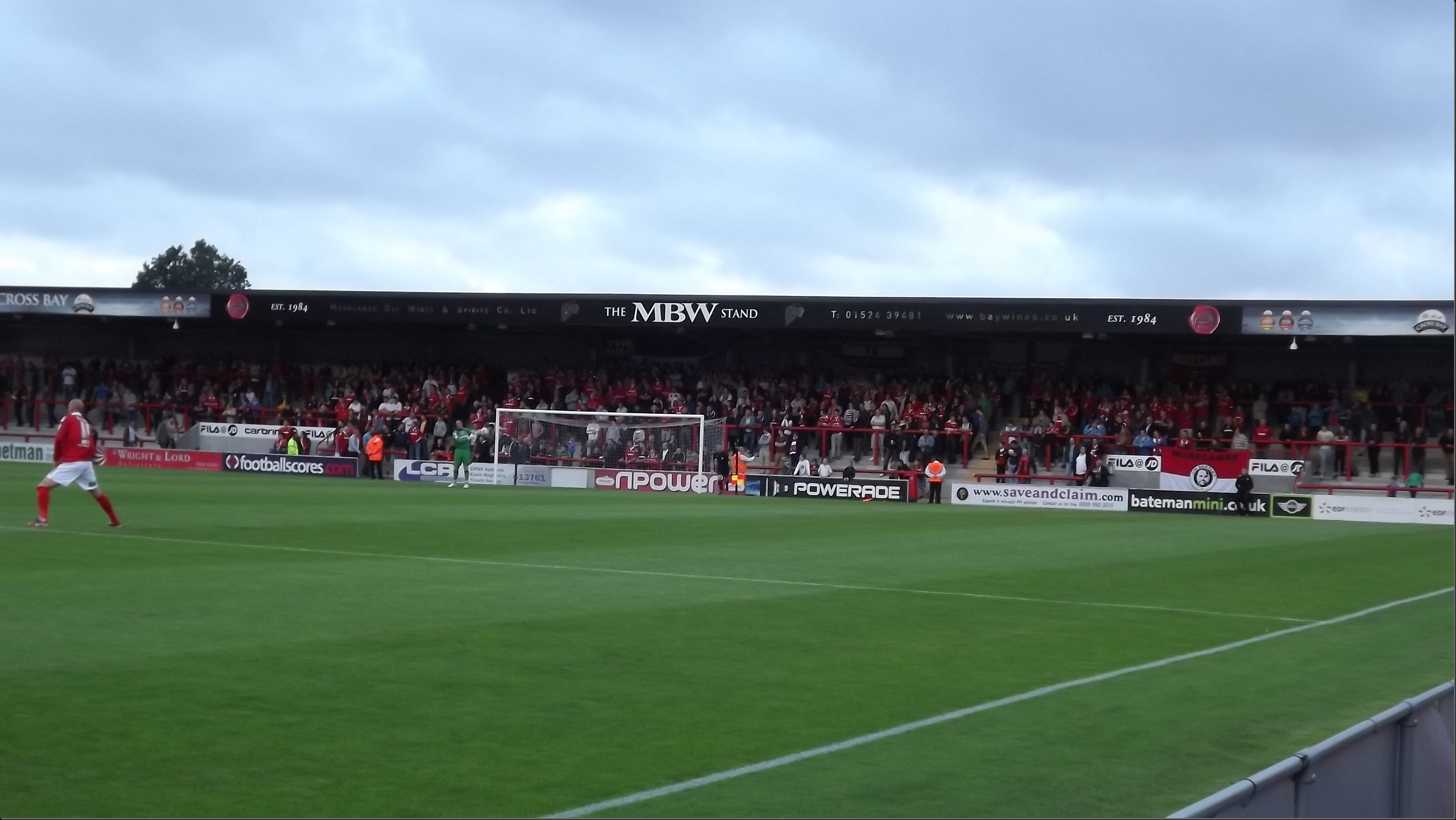 Admission to the stands was via turnstiles in the corners, apart from the open side where the turnstile brought you onto the halfway line. This was where I chose to stand. Why? Well, it was cheaper than the rest of the ground! Us ground hoppers have to count the pennies though. Admission here was £14 and £15 in the other 2 ends. The main stand prices were more still. It was a rarity to be able to pay cash at the turnstiles rather than having to go to the ticket office first. It was even more unusual to hear the chap in front of me, a regular, chat to the turnstile operator and apologise for forgetting the prices had gone up this season ( it being the 1st home game) and offering to pay the extra on Saturday. This was accepted by the turnstile operator.

Once inside the ground, I tried to buy a programme only to be told by the steward he had walked down to the corner flag. By the time I got there, programme seller had moved onto a different stand. So instead I went to the food kiosk and thereupon found the highlight of the trip, the Morecambe FC Chicken, Leek and Ham pie with mushy peas for only £3. It was worth the trip on its own. In fact these pies are so good  that they are stocked by other companies, including a certain London corner shop known as Harrods. I’m sure that you will not get the pies for only £3 in Harrods. The disappointment for me was that there were no cockles of shrimps for sale. Given the proximity of Morecambe Bay that was a shock. Its a bit like going to Grimsby and finding there is no fish there, or there are no thieves in Liverpool!

When the teams came out, the York fans tried to create a Catalonian effect with lots of flag waving. They are still on a high, with this being only their second game back in the Football League. 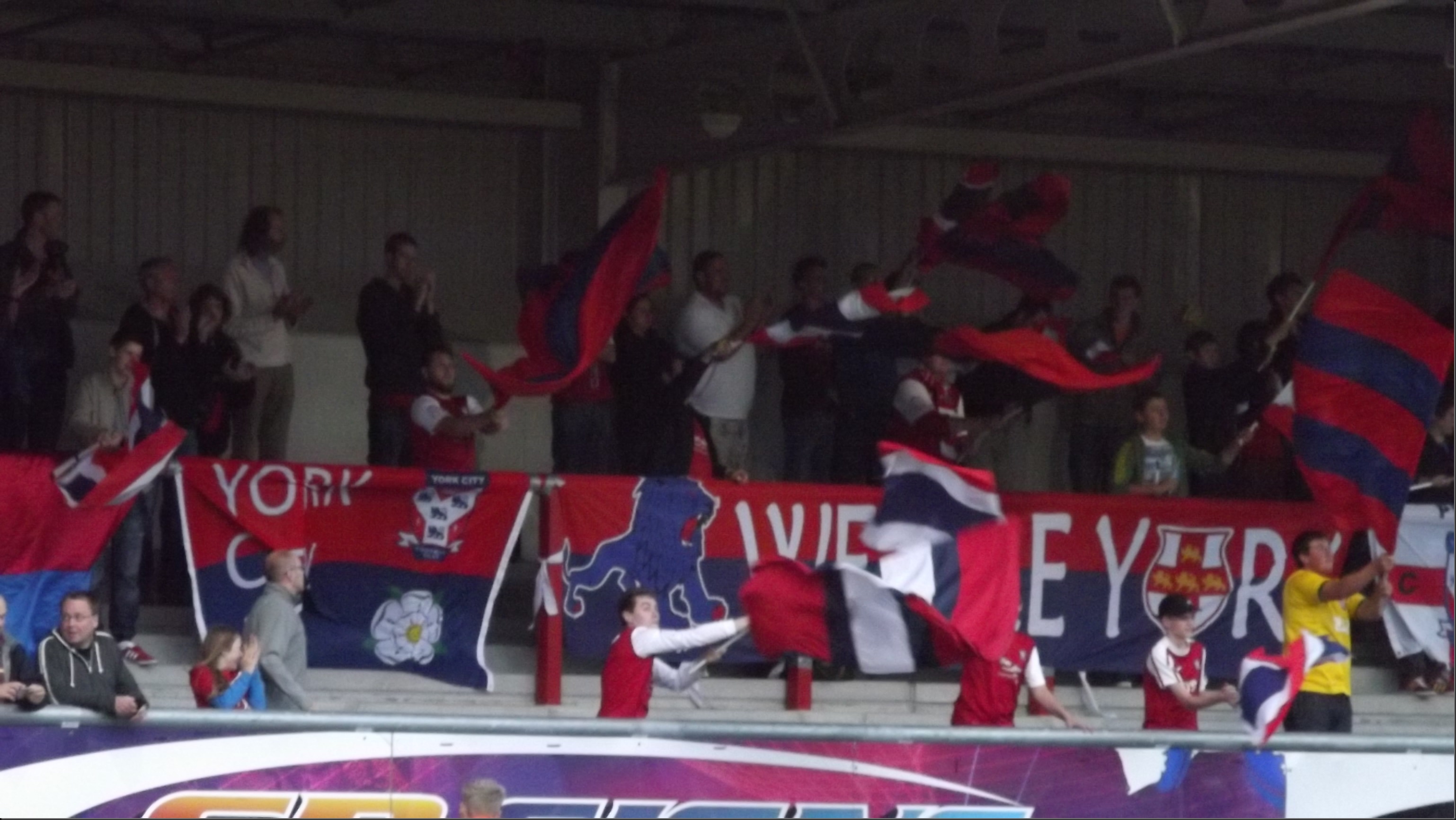 The football in the first half wasn’t too exciting, but the second half made up for that. The game ending in a 2-2 draw with Morecambe scoring their first from a penalty.

Reflections on the game and the trip are as follows:

1. This is a new ground that is not built attached to a supermarket or retail development- this seems to be a rarity these days.

2. The stewards and people at Morecambe are incredible friendly and welcoming. I was made to feel they valued my custom and wanted me to enjoy myself. Even the club photographer was telling me where to get the best shots from.

3. The small crowd did not seem drowned in some huge ground that was far too big for the size crowd they attract, unlike say Darlington were at the Arena before they moved to Bishop Auckland’s ground.

4. A small crowd in the right ground can make some noise.

5. The pies are fantastic. In fact, I’m thinking of becoming a Morecambe fan, just so I can have the pies. Well either that or I’ll get the butler to order some on my Harrods account each week.

6. I couldn’t find a pub near the ground – disastrous.

7. It did strike me that a ground like this could be the ideal solution for a club like Darlington who have vacated the 28,000 seater Arena as it was too large and the running costs crippling. They could never hope to fill such a venue. Morecambe’s ground is only a 6500 capacity stadium which allows them to fit their average home crowd into easily and allows the fans to create some atmosphere. It would be relatively cheap to build, with 3 sides being simple concrete/ breeze block construction. The main stand has a limited number of corporate boxes and has function rooms that can be used on non match days as a source of extra revenue. The Globe Arena has its own website to market it for functions, weddings, conferences etc. It is a definite option for smaller clubs and the buzz around the place seems to indicate their is a sense of pride and optimism created by the new venue.

This is definitely a club I would like to visit again. Come on Spennymoor – get to the 1st round of the FA Cup and draw these – please