Others stagger kick off times so that fans/ ground hoppers can go to more than one game in the same day. That is what Romford and Aveley did today. Aveley moved their home game with Brentwood forward to 1pm so fans could get from there to Thurrock FC’s ground a mile away where Romford play their home games. Romford were to play the exotically named Soham Town Rangers. Both these games were in the Ryman’s Division One North. This is at Step 4 of the Non League Pyramid or the 8th level of English club football. It is the level above the Ebac Northern League that Spennymoor Town play in. So, it would be logical to expect a better standard of football and bigger crowds wouldn’t it?

Well, I’ve never been to Aveley, let alone the football ground there. Thankfully I have a sat nav for the car. Without the Sat nav, I would have found Aveley, but the ground is hidden down a lane off Mill Road in Aveley.  There was little attempt to publicise the existence of the ground let alone the fact of Non League Day. i arrived at the ground less than 20 minutes before kick off. There was no sign of much activity in or around the ground, apart from cars in the Car Park. There were no spectators in the ground. This had me wondering if it was the Romford game first then the Aveley game. Had I got it wrong.

Then as I looked around the outside of the ground, i realise players were warming up on the pitch. They surely wouldn’t warm up at 12:40 for a 3pm kick off would they?

So satisfied I was in the right place, I had a look around the outside of the ground. The first thing I noticed was the impressively large looking stand. This  looked impressive from the outside.

There was car parking and significant land outside the fenced off pitch. It did strike me that there was land that could be sold off. This view was reinforced when I eventually got into the ground and saw the distance between the touchlines and the pitch surrounds. There would be sufficient space available to build numerous houses/ flats and still leave sufficient space for a new football ground built out of the proceeds of the land sale.

The turnstiles from the outside looked a little unwelcoming. There were 4 turnstiles of which only one was open. The sign is peeling off. There was no sign outside the ground to indicate there was a game on or what the admission price was. 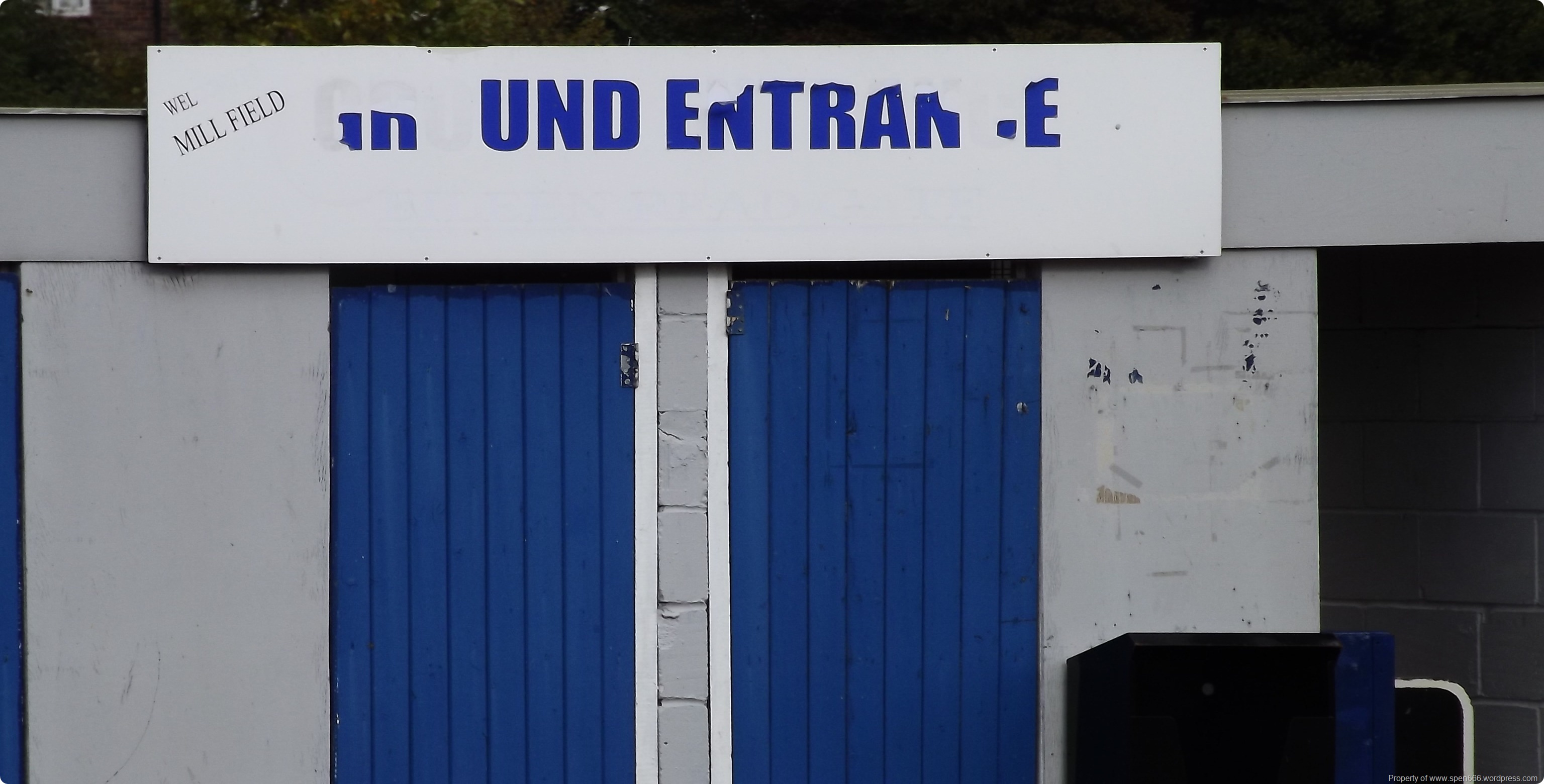 The following picture is a panoramic view of the ground some 10 –15 minutes before the kick off. note the fact there is not a single spectator in the ground at this time.

So, I made my way to the turnstile and asked about a ticket for the 2 games. The gateman said they didn’t have them because the secretary had forgotten to bring the tickets! so they wrote a receipt on the back of a business card for the club secretary and told me they had arranged with Romford for these to be accepted as proof of the payment for both games. The price for the 2 games was £12. Admission for just the Aveley game was £8, so a 2nd game for an extra £4 seemed worth it.

The ground itself is a little odd. Going into the ground, the turnstiles take you in near the corner flag. In front of you is a wide terrace with far more steps of terracing than usually seen in a non league ground. Straddling the halfway line and set behind the terrace is the main stand. 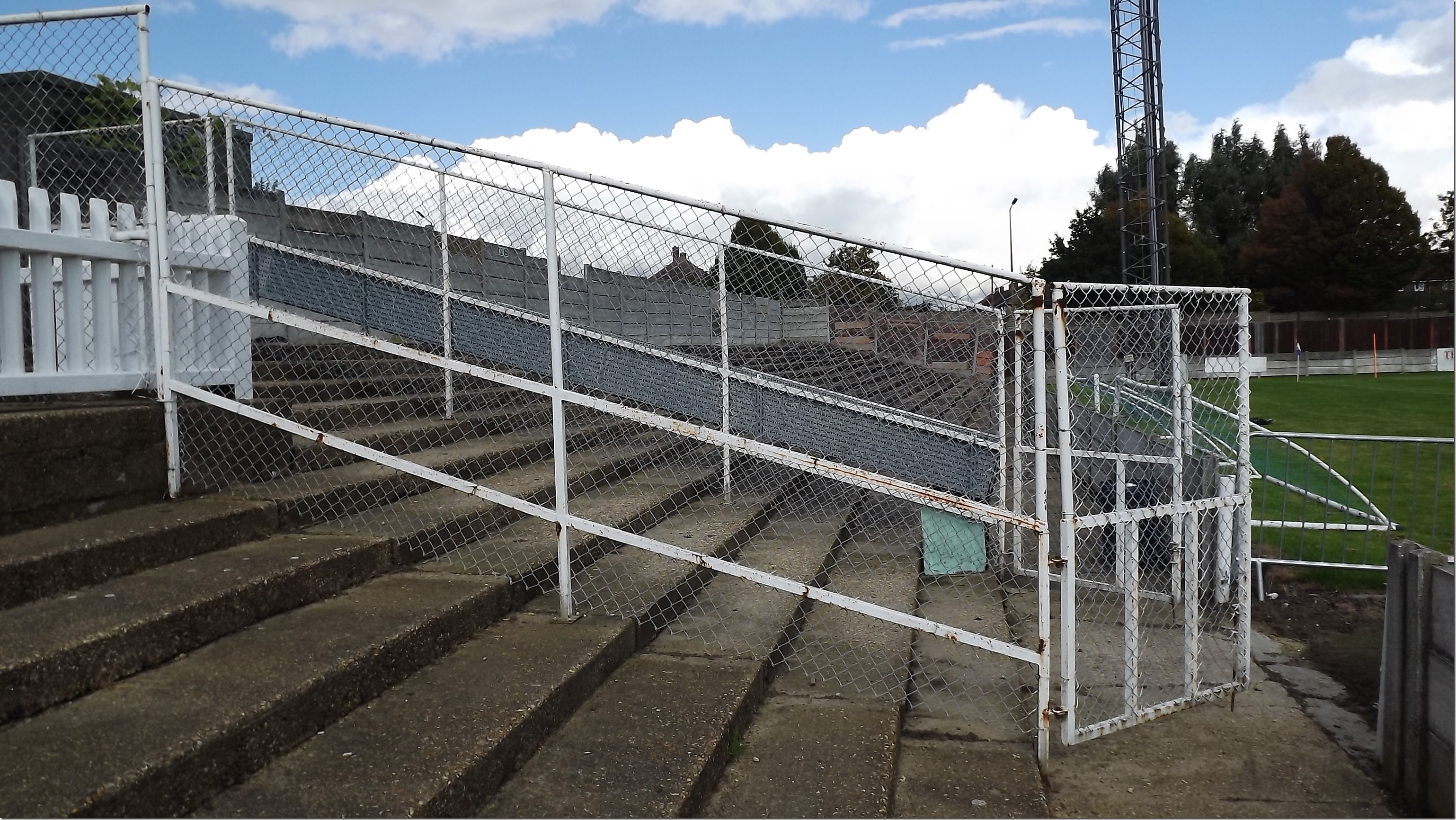 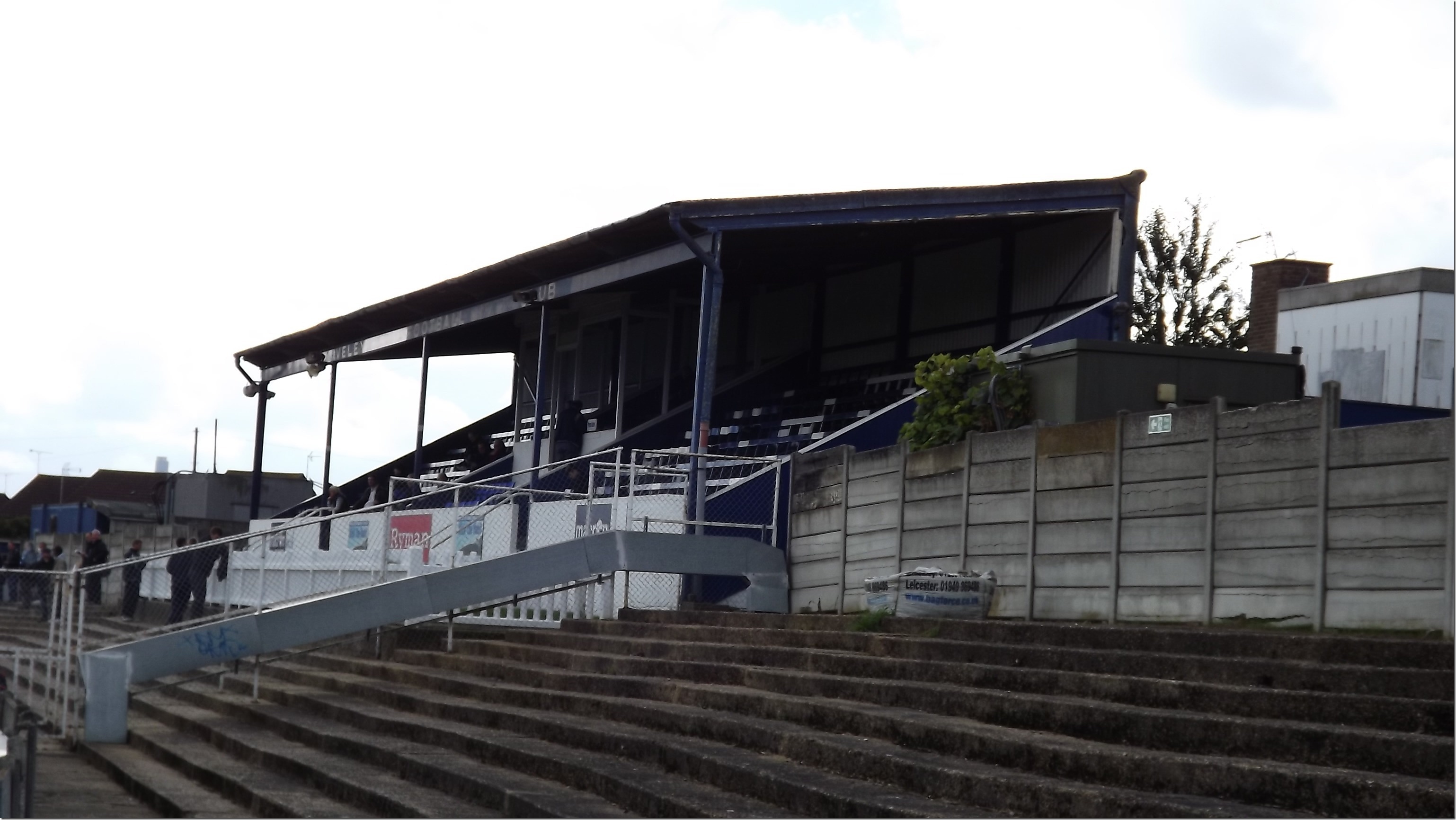 However, behind both goals and down one side, there is not much more width than a hard standing path. One goal has a small covered terraced stand.

The side opposite the main stand has a rather primitive cover on a short piece of it. The cover is basically scaffolding poles with a wooden roof over. It looks as though a breeze will blow it down. Not very impressive at all.

Now, you may note in the above picture how far from the wall the linesman is standing. The distance is similar on the other side of the pitch. This space together with the car parking and space outside the pitch boundary would enable the redevelopment of the area and allow space for a new ground as well.

You will by now be wondering why there are so few people shown spectating at the game in my pictures. The reason for this is that quite simply there were not many people at the game.  The photo below shows pretty much the majority of the crowd at the game. 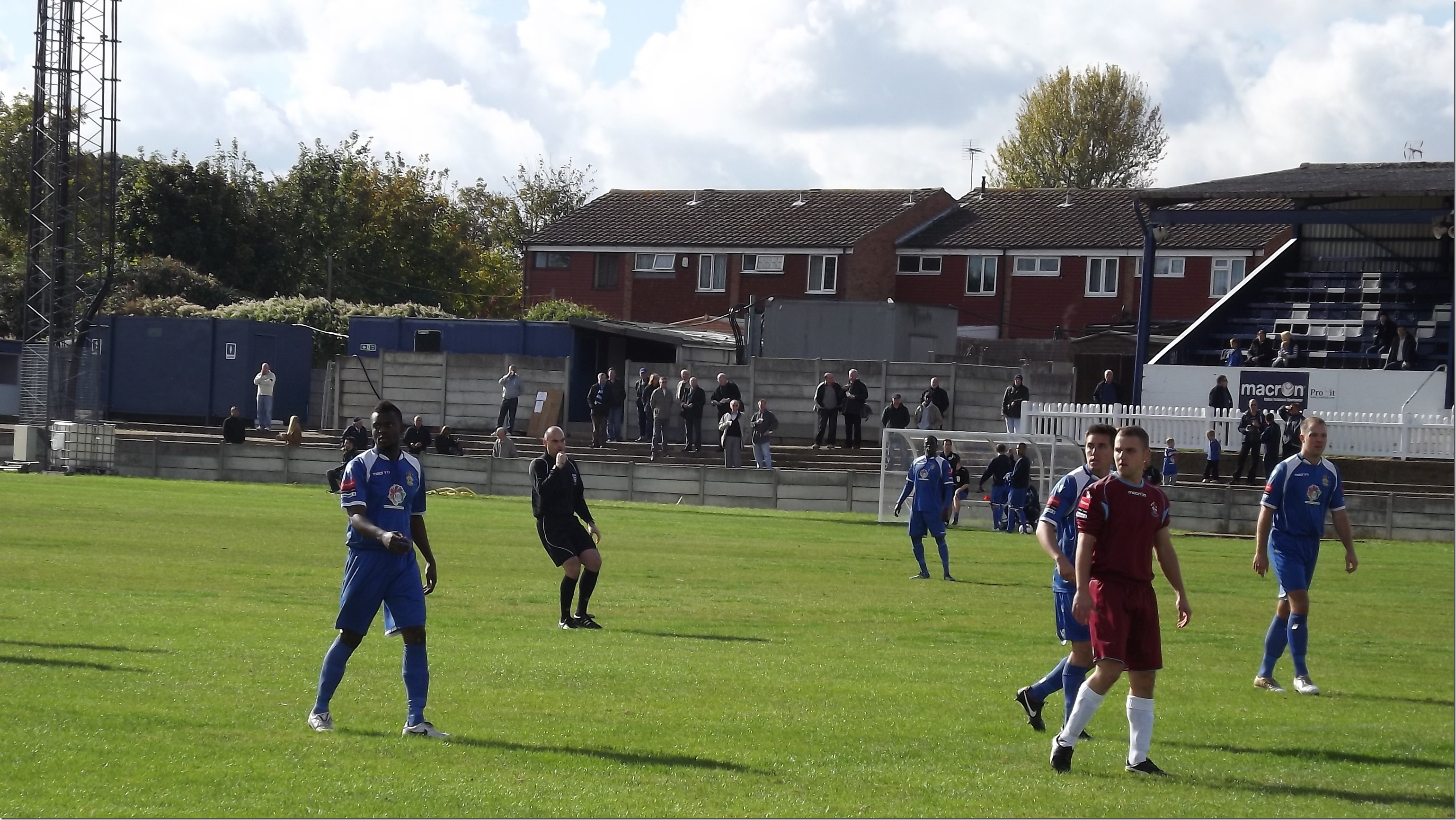 I stood opposite the main stand in the first half and counted the crowd. I reached a figure of between 50 and 60 people. Hardly impressive is it. Interestingly on the league website www.isthmian.co.uk the crowd was shown as 104. That simply was not the crowd, unless you include the 22 players, the subs, managers and officials.

Half time came and I thought time to sample the delights of the refreshment kiosk. Like I say, I thought and that was as far as I got. £3.20 for a burger seemed expensive for a burger that had little  to do with a cow despite being called a beef burger. Being a skinflint I had a cup of tea instead at £1.

So, with so little money coming through the turnstiles, how do Aveley manage to survive? Well they do have outside the ground a small clubhouse with bar and function room that will provide a regular income. That alone would not support the club in this league.

The floodlights provide a clue as to their income. There are 4 floodlight pylons. 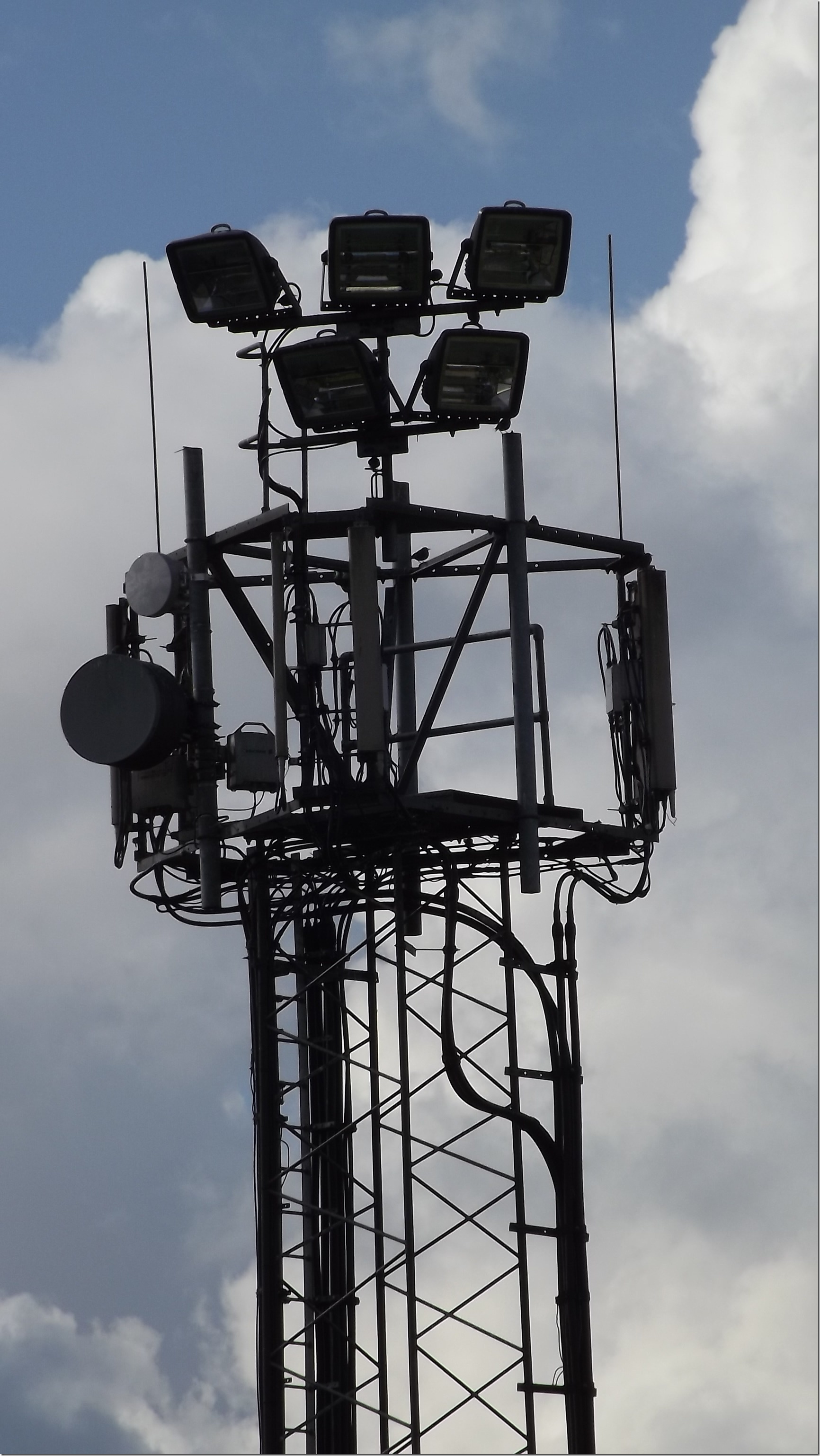 The observant amongst you will have noticed the telephone masts on the top of each pylon ( 2 of which are shown here). The sign shown below on one of the pylons is a clue

Although, I’m not sure the notice on the other side of the same pylon brings in any money to the club

One other thing to report is that the gents and ladies toilets in the ground were locked. I’m not sure what you are meant to do if you need the facilities. Its hardly welcoming is it?

The game itself was over long before half time with Aveley scoring 3 times in the first half and then cantering through the second half with Brentwood totally out played.

The lack of noise and passion from the few spectators in the ground was a contrast to the swearing and dissent shown by the players. It was disappointing to see refereeing so weak that players shouting abuse at the linesman from half the pitch away went unpunished. it was even more ironic that every shirt had on each sleeve the FA Respect badge. Its a shame the players don’t think about what that word means.

The game that started in the sun ended in a rain shower which summed u my thoughts on this trip. It was a trip I looked forward to, but ended up being a let down, with a club that seemingly is very run down and failing to attract support.

The idea of moving the kick off to 1pm to entice ground hoppers seems to have been an abject failure. Perhaps if Aveley did anything to let the local population know there was a ground nearby and that there was a game on today, then they may have had a chance of getting more spectators.