Not Ground Hopping: No Football To Watch

Well, its been a while since my last post. In that time, I have only been to one game, all the others I had thought about going to have been postponed for one reason or another. 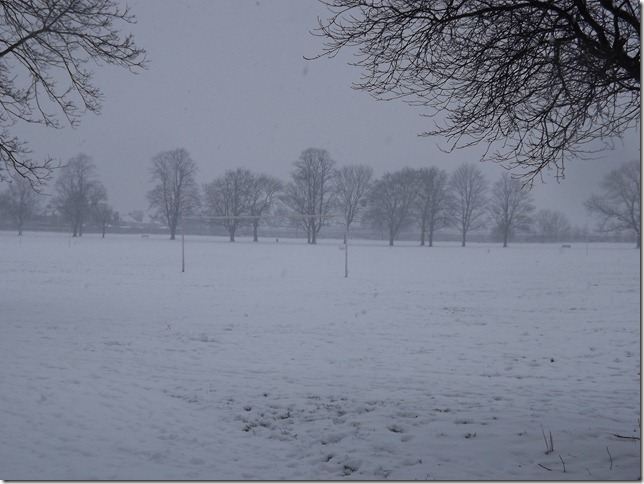 Last weekend, I went to watch Leyton Orient at home to Crewe Alexandria. A rather tame 1-1 draw was the result but it was definitely a case of 2 points dropped for Orient. Coming after they had qualified for the Southern Area Final of the Johnstone’s Paint Trophy earlier in the week, it was always likely to be an anti climax. Despite this result, I still saw far more effort and commitment from the 22 players on the pitch than i did from the Newcastle over paid players at Brighton the week before.

What is the Johnstone’s Paint Trophy I hear you ask? Well its a competition for League one and League Two teams that no one takes seriously until this stage. The early rounds kick off at 7pm and are sometimes played in front of crowds of 1000 or less. Many teams put out weakened teams. Can you imagine how bad a weakened League One or League Two team is?

Suddenly when a team gets this far they start taking the competition seriously. Why? I hear you ask. Well if they win the 2 legged Southern Area Final, they play the winners of the Northern Area Final for the Johnstone’s Paint Trophy

So what is special about playing the winner’s of the Northern Area Final? Nothing about playing them, but the game is played at Wembley Stadium. This is what excites both the players and the crowd.

Yes, the crowd, suddenly Orient who have averaged 3877 at home in the league this season and had 2755 in the Southern Area 1/4 Final of the competition, will find they suddenly have up to 15-20,000 so called fans. Isn’t it amazing where these so called fans come from?

Realistically if Orient are getting 3877 at home, they probably have around 4000 active fans as not everyone will go to every game. I for one do not get to all their home games. So what of the extra 11-16000 so called Orient fans, where do they come from? More importantly why do they not come to regular league games. Even taking the lower figure of 11000 extra fans, if only 10% of those came to Orient home games, it would boos attendances to circa 5000 and provide circa an extra £25000 revenue per game or around £0.5 million over the course of a league season. This would make a significant difference to the finances of Orient.

The other thing about the Southern Area Final is that it pits Orient against their rivals Southend. This will boost the crowd for the 2 games as there should be a significant away following at both games. Each time has given the visitors 2400 tickets for each leg.

This weekend, I had planned to go to see East Thurrock in the Rymans League Premier Division, but because of the weather, that game was off, as was every other non league game in South West Essex. I drew a complete blank in trying to find a game to watch. It was a case of no ground hopping.

I mentioned the weather, but up until today there was very little snow in the region. The papers last week were telling us that we should not travel on Friday unless it was essential. As we’ve heard so many times before it would be unsafe to leave the house and travel would be to take your life in your own hands. Well, call me a cynic, but I took the warnings with a pinch of salt. Indeed I cycled into work as usual and got there without disaster. Indeed  the only problem I had was the cold. I had put on the wrong gloves!

Once in at work all the talk was of how people would get home, and there was a general atmosphere of worry from people. Then late morning, the snow started and by the time it ended at around 2pm there was nearly enough snow in London to make a 1mm thick covering on the footpaths. Yes, London was in the grip of freak winter weather. There would be extended news coverage about this snow on the national news! How pathetic!

I cycled home as usual and sure enough the evening news was all about how London coped with the “heavy” snow. Even where I live some 12 miles from the centre of London, the snow barely covered the pavements.

The truth was that even after a further snow fall between 6pm and 8pm that night I was easily able to go out travelling by public transport (bus and train) to meet a friend for a drink and come home around midnight with no problems. Once again the media over hyping the issues in London.

Meanwhile, in the North East in the Tyne Valley in particular they have had snow for the last week and more than had fallen in London, yet not a single mention in the news. Nor was there any disruption to schools, or transport infrastructure.

Indeed on Friday morning, the news were headlining about how dreadful the weather was in Wales. All channels had reporters at various locations in South Wales telling us how the country was paralyzed by the heavy snow. Yet when you looked at the scenes behind the reporters, there was only 1-2 inches of snow. What has happened to the British ability to cope. As I child we regularly got this or more snow, but I cannot ever remember my primary school being closed because of the weather. Indeed if one of the roads into the village I grew up in was blocked by snow (a regular occurrence), then people went another way into the village. These days, either people don’t seem to try to cope with the weather, or they don’t know how to drive in the snow.

These days it seems that at the first sign of difficulty we give up. We are going backwards rather than forwards in terms of our ability to cope with difficulties. These days if things are hard we seem to give up.

Today, it snowed in Ilford and I went out to take some pictures. This is I think the heaviest snow certainly in the last four years, and possibly in the 13 years I have lived down here. Look carefully at the limited quantity of snow and then ask yourself why London will struggle to get to work on Monday. There is only about 2 inches of snow that has fallen. This fell by mid Sunday afternoon, some 15-18 hours before Monday’s rush hour, so why the problems? 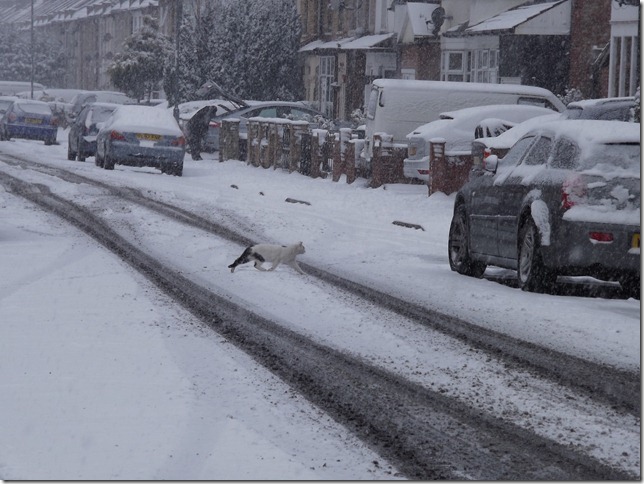 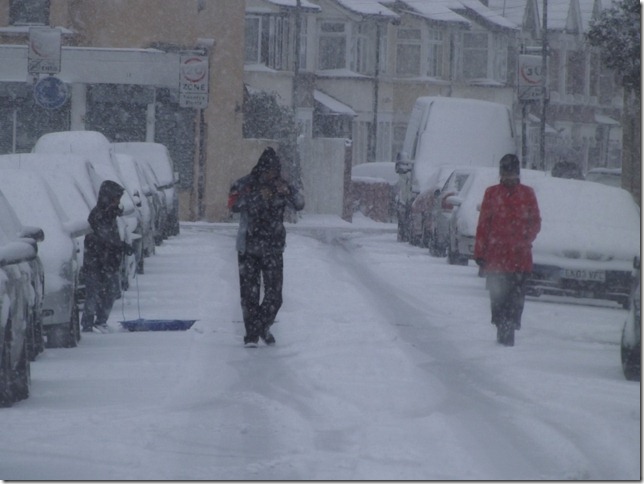 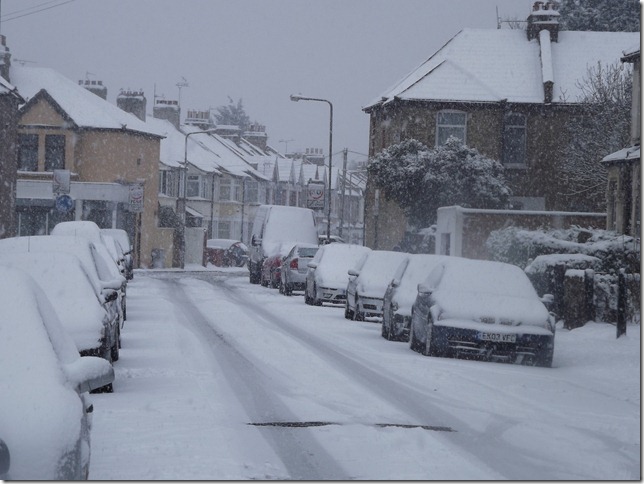 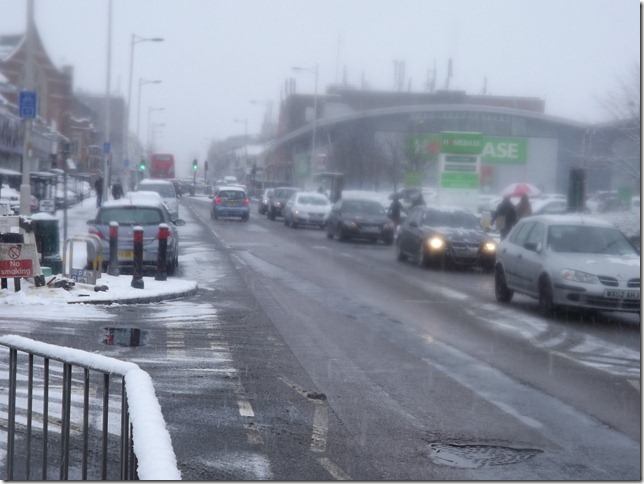 To all those in the North East and elsewhere that have several times this amount of snow and who are coping as normal, I’d like to apologise for: –

The rest of the world seeing the news coverage must think we in Britain are pathetic. The truth is that in most of Britain it is not a problem, its just the pathetic Londoner’s who seem unable to cope.

Finally, as I was walking home this afternoon, I came across three young children who were playing in the snow and had made a snow sculpture. A snowman was to easy for them. Their sculpture of an animal was rather good. Sadly my picture does not do it justice. 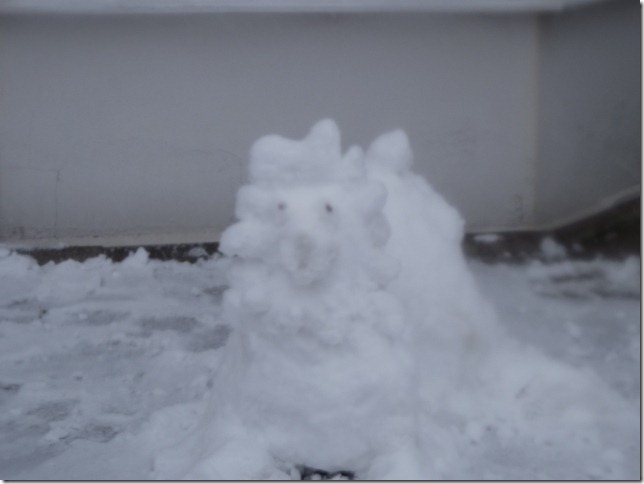 I'm a 50 something football fan and occasional cyclist. I've been a football fanatic most of my life and have completed the 92 football league & premier league grounds previously. I have 1 left to rejoin the 92 club. Added to this numerous non league grounds, a number abroad and you start to get the picture. I took up cycling in around 2000. Although my father was a former World Vets Champion, I got into cycling accompanying my son to ride in London. This was followed by my commuting to work each day into Central London. Then doing some Sunday rides, then some audax events (www.audax.uk.net) and then a week's cycling holiday in France with a friend. From there, I got more and more into cycling and in 2009 completed LEJoG and in 2010 rode in the USA with the Police Unity Tour. I completed blogs for those events at www.aminearlythere.blogspot.com and www.bothesidesofthepond.blogspot.com Feel free to read them and learn more about me. I now am one of the organising committee for the UK Police Unity Tour (www.ukpoliceunitytour.org ) I live alone which suits me as it gives me time at weekends to pursue my interests of cycling and football. (Well what did you expect me to say? That I'm sad at being single?) I'm currently looking for my next challenge. Any suggestions gratefully received.
View all posts by spen666 →
This entry was posted in Football, My Life. Bookmark the permalink.